The south coast of BC is often referred to as the “Wet Coast” – a lighthearted nod to the high levels of rain that fall here annually. However, during the BC flooding of November 2021, a series of atmospheric river events dropped an unprecedented volume of water across the southwestern area of the province, resulting in a widespread flood and catastrophic damage. Major bridges were destroyed, large sections of highways sunk into rivers. Every major route connecting the Lower Mainland to the rest of Canada was cut-off, stranding tens of thousands of people, damaging homes, impacting huge volumes of livestock, and halting the movement of citizens and billions of dollars in goods and services. It was intense and unprecedented. This is the story of our role during the incredible event, our work to re-establish connections in and out of the province and our plans to rebuild BC highways better.

Our Response During the Crisis

As the ministry responsible for managing BCs provincial highway system, we’re no stranger to emergencies – our staff regularly respond to weather and traffic events on BC highways during flood and fire seasons. But the scale of this event and its devastating impacts were far beyond what our ministry had ever experienced. Initially, the atmospheric river event of November 14-15 seemed like a typical November “Pineapple Express”. However, it quickly became clear that rainfall levels were higher than expected. As water levels rose, ministry staff jumped into action closing highways and communicating closures and impacts out to the travelling public.

Once the weather system had passed, the ministry was able to deploy engineering, geotechnical and operational staff into the field to perform corridor assessments and bridge inspections. All told, more than 300 sites on Highways 1, 3, 5, 7, 8, 11, 19 and 99 were impacted due to water damage, ranging from minor to complete loss of infrastructure.

The ministry, along with provincial emergency management, local municipal governments and the federal government, quickly pulled together with a common goal: to get highways re-opened, people home and supply chains restored during the BC flooding. Emergency Operations Centres were activated and plans were developed to mobilize resources to establish emergency reconnection. Highway 3 was prioritized for immediate repair, to provide a corridor for essential goods and services while crews worked around the clock to re-establish connections on the badly damaged Coquihalla Highway; however, the windy, two-lane road was considerably slower going than the Coquihalla and winter conditions meant additional delays.

A provincial state of emergency was declared on Nov. 17, 2021 (lasting until January 18, 2022). Early on, that meant fuel restrictions were put in place across southwest BC, and routes were limited to essential travel only, to ensure that life-saving services and essential supplies could be delivered. To ensure the public was kept informed of the rapidly changing situation, our own communications team here at TranBC, was active throughout the emergency, communicating new developments and sharing updates as required.

We created teams for each impacted corridor and included ministry and maintenance contractor staff, Indigenous environmental and archeological monitors, consulting engineers and construction firms. They worked in synchronicity, 24/7, designing, constructing and monitoring progress in real time.

Boundaries between jurisdictions, contracts, and communities relaxed in favour of collaboration, speed, and safety. The priority was restoring safe emergency vehicle access and emergency supply chains, and access for public health and other support services. Teams coordinated safe exits for hundreds of vehicles stuck between multiple mudslides.  They worked with the agriculture sector to ensure safe passage for livestock at risk of starvation and collaborated closely with emergency responders to provide emergency access for communities that were without supplies, clean water, and power, or to bring in supplies where road access was not possible. 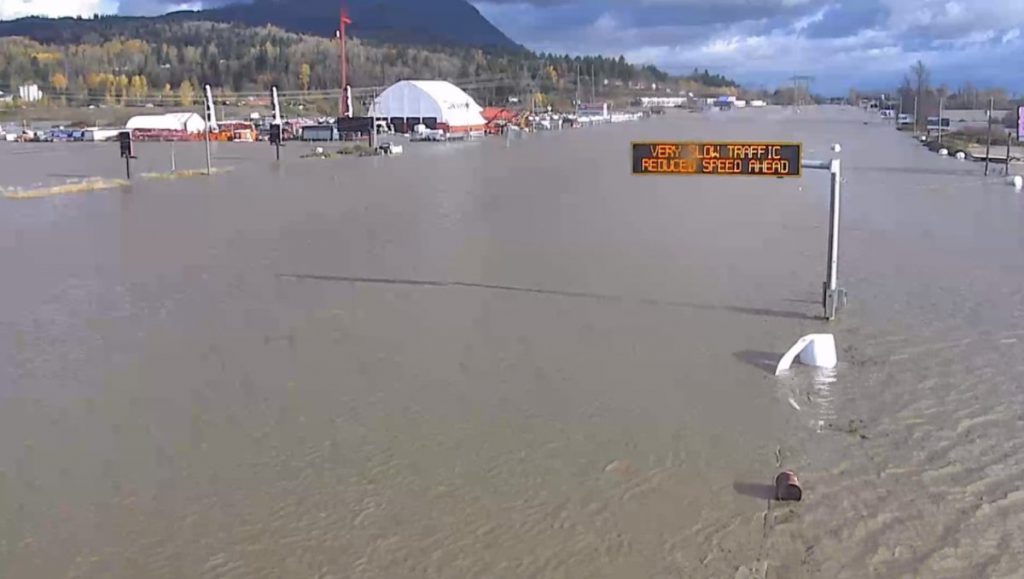 Other scenarios required a different level of response. To protect Highway 1 around Abbotsford, from further damage from a breach of the Nooksak River, a temporary “tiger dam” was installed. This was an unprecedented collaboration by the Canadian Forces, Abbotsford emergency responders, local First Nations and the ministry. It took place with over 70 volunteers working throughout the night to hold back the threat of more flooding.

Work restoring damaged highways took place at more than 300 sites and was performed by thousands of people and hundreds of pieces of heavy equipment. Challenges were numerous, including a second (and third!) atmospheric river event, winter storms (with temperatures below -20 Celsius and higher than average snowfalls) as well as health precautions due to the COVID-19 Omicron variant.

Each obstacle was faced with determination and commitment to continue the work. These monumental efforts to safely reopen routes and reconnect BC’s supply chain were realized in under two months, with Highway 5 re-opened to commercial vehicle traffic on Dec. 20, 2021 (just 35 days after the flood event) and then opened to all traffic on January 19, 2022. Other impacted locations took longer to reconnect, with Highway 1 opening on January 24, 2022, after the installation of a temporary acrow bridge at Jackass Mountain. Highway 8 remains in active recovery, with work continuing seven days a week to re-establish connection on the corridor.

British Columbians (and the rest of the world) followed this incredible progress and celebrated our collective success in reconnecting our roads and communities once more.  We want to thank everyone for their support and understanding during this extremely challenging time. It was truly appreciated.

Our Plan for Building Back Better

The people who build and maintain roads in British Columbia have a reputation second to none, and their response to this disaster was remarkable. Working day and night, this team of dedicated folks completed temporary repairs that allowed many areas to reopen. However, the damage is extensive and it will take years to fully recover. Now that we’ve turned the page from emergency response, we are focused squarely on building back better — making sure our highways network is strong, resilient, and reliable for the new climate reality we’re in.

What Does this Mean for You?

The exceptional damage from the flooding and our efforts to rebuild better mean that travellers on BC highways can expect improvements but not without significant delays over the next few construction seasons.

We’re working hard to coordinate these works across the province to help minimize those delays; however, travellers are encouraged to plan ahead, give themselves plenty of extra travel time and be prepared to stop while we repair our roads. DriveBC.ca, our traveller information system, is your best bet for information about any event on BC highways that are impacting travel.

Our construction is not just limited to flood recovery — it includes all the other projects we’re working on across the province, like our Highway 1 Kamloops to Alberta Four Laning Program, which continues at multiple locations on the corridor. In order to keep travellers informed of anticipated delays between Vancouver and the Alberta border, we’ve updated our Trans-Canada Highway Four-Laning advisory site to include estimated travel times for the Coquihalla Highway as well. If you are planning on travelling between Hope and the Alberta border this summer – make this advisory site your first stop and build our estimates into your travel time.

The road to recovery has begun and we are looking forward to making BC’s transportation infrastructure the best it can be. We appreciate your patience as we continue to work toward better highways for all your future travels.

>>> Meet BC SIMS – Our Seismic Infrastructure Monitoring System
>>> DriveBC Agents – A 24/7 Channel to BC Highway Information
>>> How We Are Fighting Wildfire Impacts at Elephant Hill
>>> What is Freshet? Hint: It’s NOT an Air Freshener
>>> Are These the Most Amazing Emergency Vehicles in BC?

Do you have any questions about this, or anything else we do? Let us know in the comments below.

Page 1 of 10 comments on “BC Flooding: What Does the Road to Recovery Look Like for Our Highways?”