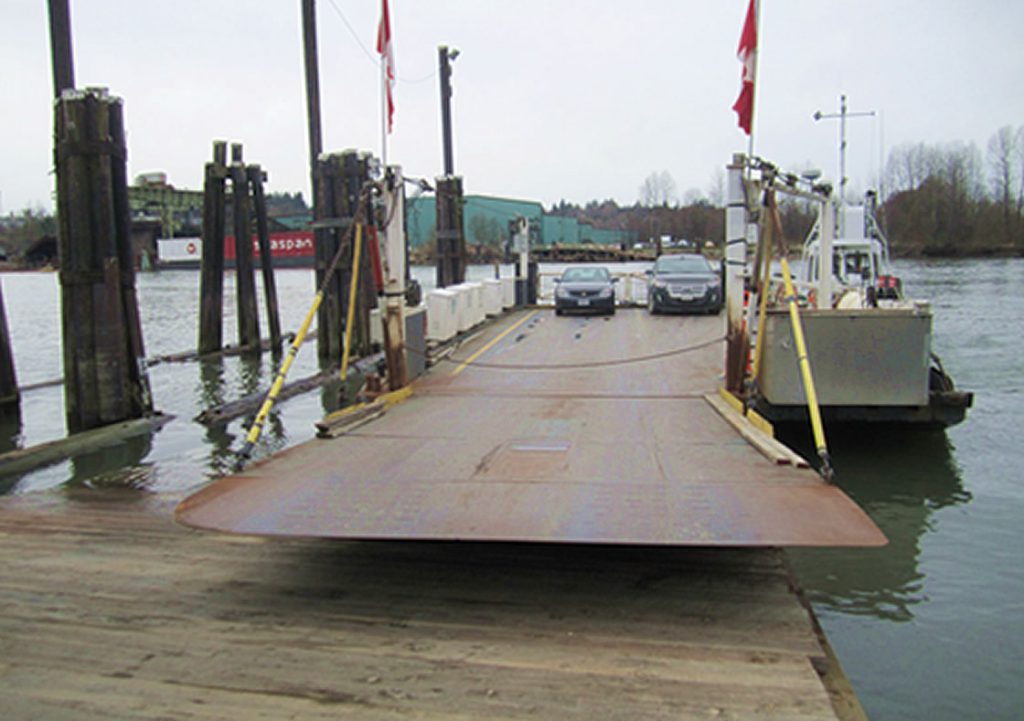 A tiny agricultural oasis in the middle of BC’s busy Lower Mainland is supported by the last provincial government ferry on the Lower Fraser River.

Since 1916, the Barnston Island Ferry, that travels between Port Kells in Surrey and Barnston Island, has been serving livestock, vegetable, hay and dairy farms, including Avalon Dairy which began in 1906. These days, cranberries and herbs are also grown on the 567-hectare island. There are no roads to the islet, so the ferry enables transport of agricultural supplies, equipment and workers and the shipment of farm products to mainland markets.

Moving Milk for More than a Century

The ferry’s role as a supply vessel is so intrinsic to Barnston Island’s food production, that in the 1920s, it served as a milk shuttle. In the early 1900s, milk production on the island had increased, as did requests from the Barnston Island farmers for better ferry service. So, in 1921, the government purchased an 11.6-metre fish boat to use as a ferry.

The ferry sailed around Barnston Island’s 10-kilometre perimeter, picking up milk cans from various farms and delivering them to Port Kells. The ferry made a “milk run” around the island each morning before launching its regular daily service across Parsons Channel. At the end of the day, it returned the empty numbered milk cans to the farmers, ready for refilling and the next morning’s haul.

After roads improved and until around the 1950s, a truck would drive onto on the ferry daily to pick up about 100 milk cans from around the island. These days, the ferry accommodates one full milk container truck at a time (and no cars). About six trucks a day visit the island to haul milk.

Animals are not usually transported on the ferry due to safety concerns, and because the vessel lacks the capacity to accommodate large, long-distance haul cattle liners.

Last Ferry on the Lower Fraser

At one time, the Fraser River (the longest waterway in BC) had at least 35 ferry crossing locations spread between Croydon (near its headwaters) and Ladner (near its terminus). The Barnston Island Ferry is the last ferry route on the lower Fraser River, as others were retired as roadways and bridges expanded.

Beyond being a “farm transport vehicle” the ferry carries “day trippers” who come to walk or cycle Barnston Island. Active modes of transport are necessary for visitors, because there is no public parking available or permitted on the island, including at the two park areas. Adventurers exploring by foot or bike travel the flat, narrow road atop the dike that encircles the island and protects it from spring freshet.

Reversing in Time (Off the Ferry)

If you’re thinking of visiting Barnston Island, be aware that travellers’ descriptions of the island as “quaint” are 110 per cent true. The little island is unincorporated and does not belong to any municipality. There are no stores, no public sources of drinking water and no medical services. Oh, and you must back your vehicle off the ferry when you arrive at the island and back it onto the ferry when you leave.

You can watch the tugboat-barge combination ferry at work on the Fraser River via our webcams at Port Kells, looking east, and the Barnston Island Ferry Landing, looking west. The barge, Barnston Island No. 3, can take up to five vehicles and 52 passengers for the five-minute trip and runs on demand, daily. Depending on conditions, it can be an idyllic sailing to a place of stillness.

Find out more about our fleet of free freshwater ferries:

Do you have questions about our inland ferries? Ask away, below!