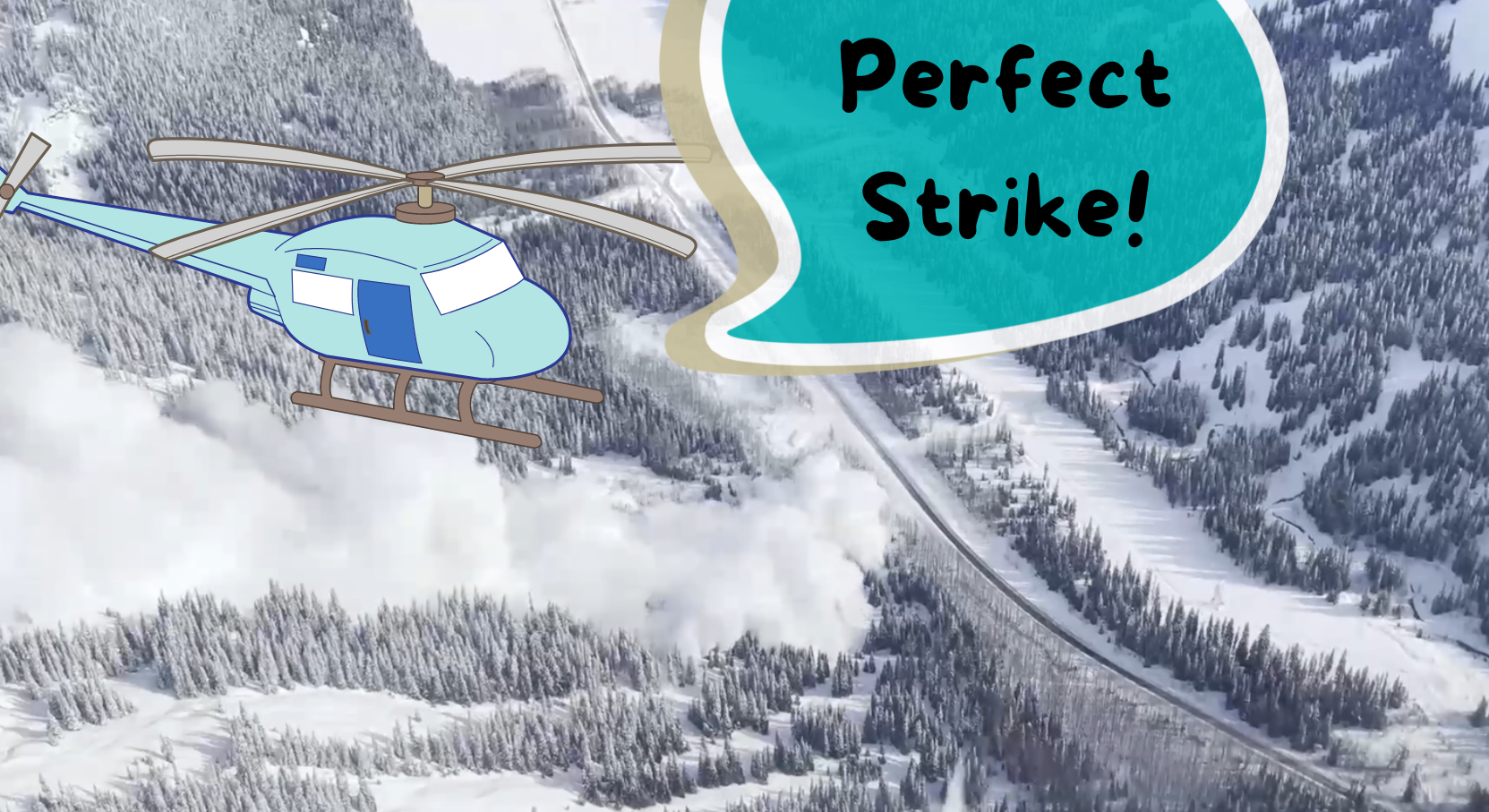 Jargon – noun
jar·​gon | \ ˈjär-gən
: the technical terminology or characteristic idiom of a special activity or group.

As much as we avoid using transportation jargon, or slang, in our communications with you, much of our work is steeped in complex terminology and technical language. After all, we are a ministry of engineers, avalanche technicians and commercial vehicle enforcement officers, among others.

Well, an idea came to us one day when our avalanche crew used the term “perfect strike” to describe a controlled avalanche that stopped right before the debris hit Highway 37N, thus requiring no cleanup and allowing for a more prompt reopening. We thought, “gee, there must be more of these fun little terms being used,” so we started canvassing other business areas in the ministry.

Here is the result, starting with the group that prompted our lightbulb moment:

Put the coffee on: Triggering a controlled avalanche on a highway.

Red dot on five: A misfire of an O’bellx, which are mobile units that are installed on their own towers and can trigger avalanches remotely.

Beat down: A prolonged period of avalanche control work without a break due to storms.

Slider: A bag of explosives dropped from a helicopter that fails to stick on the snow and proceeds to slide down the mountain.

Stuck in front of the box: An office day for an avalanche technician (they much prefer being outside).

Pup: AKA pup trailer. It’s a trailer that is pulled behind a truck (usually a dump truck). It’s referred to as a pup because it follows along like a dog on a leash.

Bobtail: To operate a tractor unit with no trailer attached.

Trombone: Usually referred to as “stretch trailers” or “trombone trailers,” these trailers work well when freight is too long for a standard flatbed trailer.

Piggyback: It works like this… First, the front tractor-trailer has a truck attached to it, generally using a saddle mount. Then, another truck is attached to the back of this truck. Makes sense, right?

Saddle mount: A device used in a driveaway or towaway operation to perform the functions of a conventional fifth wheel and is designed and constructed so that it is readily detachable.

Baffle: A partition or separator within a liquid tank used to minimize the flow of fluids within the tank. This is to prevent unexpected forces on the vehicle caused by the movement of the liquids during acceleration, turning and braking.

Super single: A popular name for a single, larger wheel and tire, (properly called a “wide-base tire”), substituting a tandem, or double axle, assembly. The main benefit of a super single is a reduction in weight and lower rolling resistance, which can improve fuel economy.

Headache rack: A sturdy aluminum wall or steel mesh structure affixed to the tractor between the cab and the fifth wheel to protect the tractor occupants from the load on the trailer.

Fifth wheel: The hitch or coupling component that connects a cargo attachment (i.e. trailer) to the back of a tractor unit.

Free body diagram: A sketch of a structural component showing all the external forces and reactions acting on the component – used to help engineers determine the design load effects.

Shear force: Force effect in a structural member such as a beam or column that is caused by loads trying to shear through the member.

Turn of nut: A technique used when tightening the nut on a structural bolt used to obtain the necessary tension in the bolt. The technique is based on first tightening the nut snug and then applying a specified amount of additional rotation (depending on the bolt length) to further tighten the nut, usually an additional 1/3 to 1/2 turn of the nut.

Slump: A measurement used on wet concrete to determine the fluidity and consistency of the concrete as a quality control test.

Bending moment: The force effect in a structural component such as a beam or column that is caused by loads that make the component bend.

Bailey (Bridge): A portable, prefabricated, modular, panel bridge developed in the Second World War. While no longer in production, there are many examples still in service and the term is used to refer to modern equivalents such as Acrow Bridges.

Other Engineering and Miscellaneous

Top of the hour flush: A temporary reopening of a road during a longer closure to clear traffic in each direction.

Historical slide area: A location that has a history of slides due to its location and ground conditions.

CRB or No-Post: The concrete roadside barrier used along the sides of BC highways. In the past, these barriers were steel beams held up with wooden posts driven into the ground.

Gore: The painted section of asphalt between the main highway and the off-ramp as the two roads begin to separate.

Zebra markings: White and dark stripes on the road designed to warn drivers of a pedestrian crossing. Zebra markings are more visible than parallel lines due to their length being longitudinal to the highway.

Platoons: Groupings of vehicles that travel together due to encountering slower-moving vehicles or traffic signals.

Phew! That’s a lot to take in. We’re always consulting with ministry subject matter experts as we work to answer your questions and communicate information to you, so we’ll continue adding to this dictionary of transportation jargon.

Can you think of any terms that should be included? Any transportation jargon you’ve heard that left you scratching your head? Let us know in the comments section below.

And in the meantime, if you liked this blog, you may be interested in the following:

>> DriveBC Agents a 24/7 Channel to BC Highway Information

>> Behind the Scenes with Our Highway Operations Managers

>> A Look Back at the BC Provincial Sign Shop