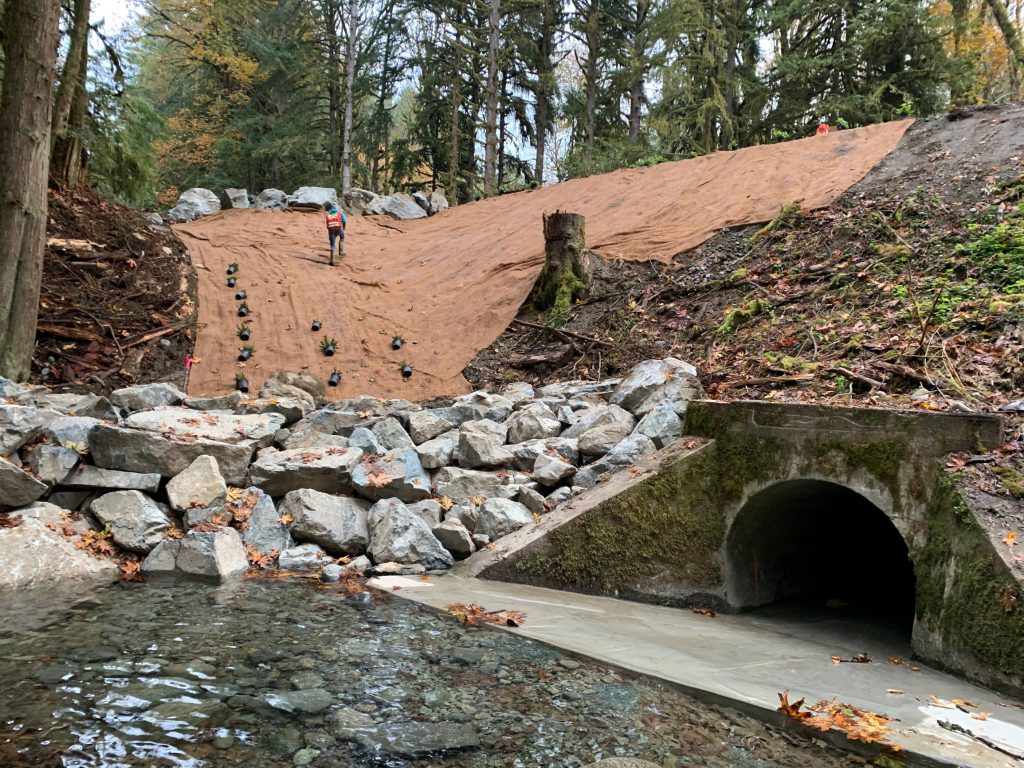 True, we are road builders. But the recent series of upgrades to the popular multi-use Cowichan Valley Trail is a reminder that we are also trail builders.

In fact, we own six rail trails around BC (including the well-known Galloping Goose Regional Trail in Victoria). While we lease most trails to local governments to operate and maintain, we actively operate the 23-kilometre section of the Cowichan Valley Trail between Holt Creek and the Town of Lake Cowichan.

Just as highways can be impacted by flooding and washouts, so too can these recreational trails that people are enjoying now, more than ever, as they seek time outdoors during the COVID-19 pandemic.

“Our trails are a welcome sanctuary in the time of COVID,” said Tourism Cowichan executive director Jill Nessel. “They are one of the best examples of how to experience Dr. Henry’s “few faces, open spaces” safely, and always with the reward of a new sight to behold or sound to be heard along the way.”

When heavy rains hit the Cowichan Valley in January 2020, a massive sinkhole formed – 10 metres in diameter and five metres deep – due to a failed culvert at Dry Bend Creek, which severed connectivity east of the Marie Canyon Trestle (64.4 Mile).

We needed to redesign and repair the culvert before backfilling and restabilizing the washout site.

But here’s where it got tricky. The closest access point for workers was more than five kilometres down the trail to the east. What’s more, there were structural load limitations on two trestles between the access point and the washout site, so we needed to make trestle upgrades to allow machines and aggregate trucks through to do their work.

We also made upgrades between Mile 70 and the sinkhole site, including brushing, regrading, resurfacing and culvert installations.

Out with the Old, in with the New

With the trestles ready to take on the needed equipment, crews got to work on repairing the culvert, which CN Rail originally installed way back in the 1920s when the use of rebar wasn’t common practice for concrete culverts of this size. Rebar is important because it increases the strength of the concrete, helping it resist cracking and breaking.

How did the culvert fail? It appears that, over time, Dry Bend Creek eroded the base of the culvert, allowing water to seep underneath the walls and wash away sections of the trail bed around the culvert. This caused large voids to form at the base without directly impacting the surface. But then, when heavy rains saturated the trail bed and increased creek flow, there was a sudden surface failure that created the sinkhole.

The repaired culvert is stronger and has a new concrete floor (with rebar!) and reinforced walls.

Filling it in with Fish in Mind

Once culvert repairs were completed, it was time to backfill the sinkhole and stabilize the area with rip rap, which protects the slope from water erosion by absorbing and deflecting the impact of water before it reaches the important stuff – the trail! Rip rap also creates habitat for wildlife. When used along waterways, rip rap supports small marine animals; meanwhile, dry land rip rap provides shelter to a variety of land loving plants and animals.

Speaking of wildlife, we made sure construction was done within the fish window – in other words, when no spawning was taking place. We also took precautions to prevent fish from being harmed from site activities; for example, installing fish exclusion fencing.

To see how Dry Bend Creek and the repaired culvert function in the long term, hydrometric instruments are being installed at the site to regularly monitor water levels. Given that this creek is a tributary to the Cowichan River, the collected data will also help inform how precipitation and flooding affect the Cowichan Valley. The data from these instruments will be shared with the Cowichan Tribes.

We also worked with BC Parks to replace trail facilities in the eastern part of the Cowichan River Footpath from the Glenora Trailhead to kilometre three. Most of the facilities along this section of the footpath had seen better days, having been installed in the late 1990s. The upgrades included new bridges, boardwalk and safety railings.

In fact, much of the trail infrastructure along the Cowichan River Footpath is nearing the end of its life. This year’s work represents Phase I of a multi-year plan where BC Parks will replace and upgrade much of the existing trail facilities along the Footpath’s entire 20-kilometre length. These upgrades will improve safety and help people enjoy the trail system year-round.

Year-round access is tremendously valuable, emphasized Nessel, as the trail systems in Cowichan connect people to each other and the outdoors.

“They have an international reputation and draw people from all over the world. And locally, they are perfect for families to wander aimlessly, to get out in nature and spend time together. A common phrase you hear in Cowichan is, ‘Where did you walk today?’, where locals share their favourite routes with each other, noting the waterfall or rock formation, the view over a cliff or dense fern carpets they’ve seen on their travels.”

These are welcome improvements indeed, with the number of people visiting on the rise, according to the Cowichan Valley Regional District. In 2019, Glenora Trails Head Park received more than 63,000 visits, an 11 per cent increase from 2018. A trail counter on the main access to the Cowichan Valley Trail from the park shows more than 21,000 visits in 2019, which is a 13 per cent increase from the year before.

Interested in learning more about this type of work? Here are a few blogs and videos you may enjoy reading/watching: