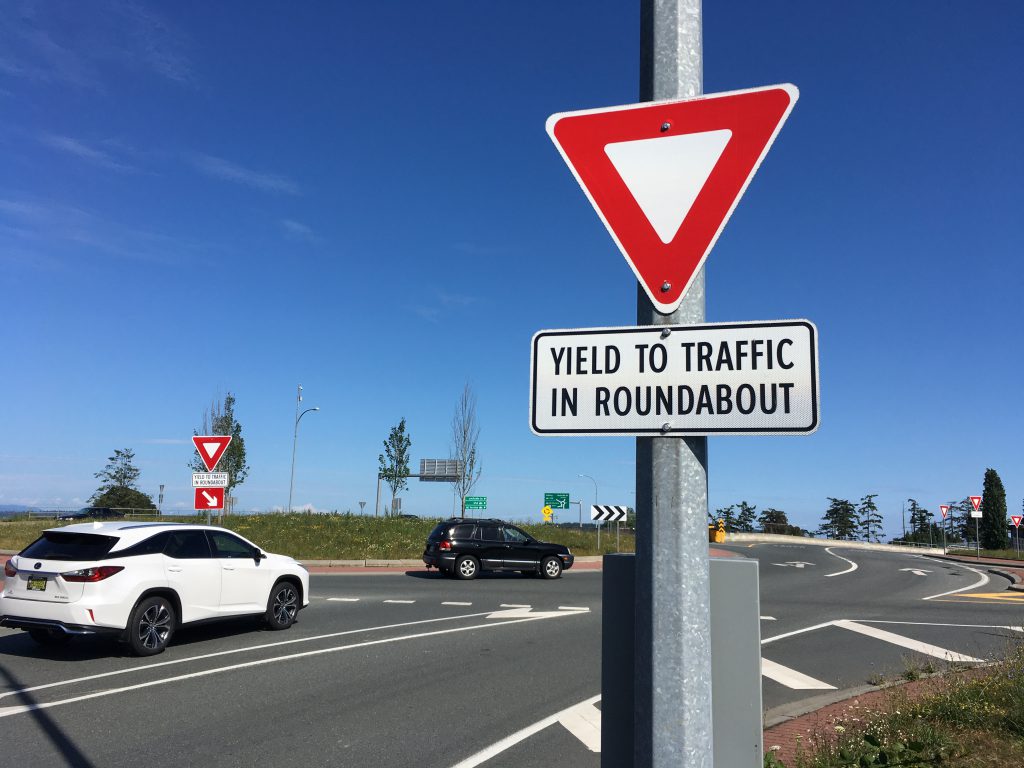 The rise of roundabouts in BC has set some people’s heads spinning on how to safely navigate them, whether as a driver, cyclist or pedestrian. So, we created the following guide to help set the record on roundabouts …er… straight.

There are more than 35 roundabouts on provincially maintained roadways across the province, but not all roundabouts are designed the same. Roundabouts can vary in size, number of lanes, and number of entrances and exits. Nevertheless, the same basic rules apply for all roundabouts.

How to Use Roundabouts

There are two golden rules for entering an intersection controlled by a roundabout:

Multi-lane roundabouts at intersections have directional signs and pavement markings to help guide drivers. The signs offer a general depiction of the roundabout, complete with destination symbols (i.e. airport) and road names; they also show which lanes should be used for the various destinations. As you approach the intersection controlled by a roundabout, look at the signs to determine which lane you should be in. Get into the appropriate lane for your destination before entering the roundabout.

Now that you have chosen your lane, identified your destination’s exit, and yielded to pedestrians using the crosswalk, then come the golden rules stated above. This is the crux of any roundabout – get this right, and you’re in pretty good shape.

As you approach your exit, activate your right turn signal so pedestrians, cyclists and other drivers know your intentions.* And again, yield to pedestrians that may be crossing the exit lane’s crosswalk.

*More on signalling at the end of this blog

Roundabouts have what is called an “apron” encircling the centre island. This raised, coloured section allows longer, wider vehicles extra clearance when needed. Please remember to give large trucks lots of room to travel through roundabouts.

If you are driving in a roundabout and you hear an emergency vehicle, do not stop! Continue through your intended exit and then pull over.

Cyclists have a couple choices when it comes to roundabouts.

Pedestrian crosswalks with pavement markings are located about one car length away from the roundabout. It’s important to only cross at these marked locations; don’t get stranded by cutting across to the central island (there’s really no reason to be there and it’s not safe).

Although vehicles are required to yield to pedestrians, you shouldn’t initiate a crossing unless there’s an adequate gap in traffic or all approaching vehicles have stopped. It’s important to note that a dedicated bicycle path may also connect to these crosswalks – be aware that you’re sharing the crosswalk and pathways with cyclists.

Intersections controlled by roundabouts are increasingly becoming a go-to design. So, why are they being used more? It comes down to, what we like to refer to, as the bread and butter of transportation: safety and traffic flow.

Roundabouts are used when engineering and traffic analysis determines they will provide improved safety and traffic flow for users. Some considerations include traffic volumes, number of intersecting roads, land/cost requirements and collision history.

History of Roundabouts in BC

While circular intersections (rotaries) existed in North America since the early 1900s, the modern roundabout was born out of the United Kingdom in the 1960s, before emerging in Canada in the 1990s.

One of the first modern roundabouts built on a provincial road in BC is the double roundabout on Eighth Avenue, just off Highway 99 and west of Highway 15, near the US border. This location, which opened in 2005, features two roundabouts on either side of the interchange.

In 2011, one of BC’s largest networks of roundabouts opened to traffic on Highway 17 at McTavish Road just south of Sidney. Previously a signalized intersection, a combination of three roundabouts improved traffic flow to and from the Victoria International Airport, the Swartz Bay ferry terminal, and the rest of the Saanich Peninsula. The roundabout network also incorporates a six-bay transit exchange and 200-stall park and ride lot.

Some more recent examples of roundabouts include:

Signalling at Intersection Controlled by Roundabouts

As ICBC states in their Learn to Drive Smart Manual, signalling right before exiting a roundabout is beneficial, as following vehicles know your intent to exit. Signals when turning is included in the BC MVA: “If a signal of intention to turn right or left is required, a driver must give it continuously for sufficient distance before making the turn to warn traffic.”

That means, when entering an intersection controlled by a roundabout:

This view is shared by other countries, such as the UK, and it is our recommendation. That said, it would be a victory in and of itself if drivers at least signalled right before exiting roundabouts. We see many drivers that do not signal at all – whether entering or exiting – roundabouts. 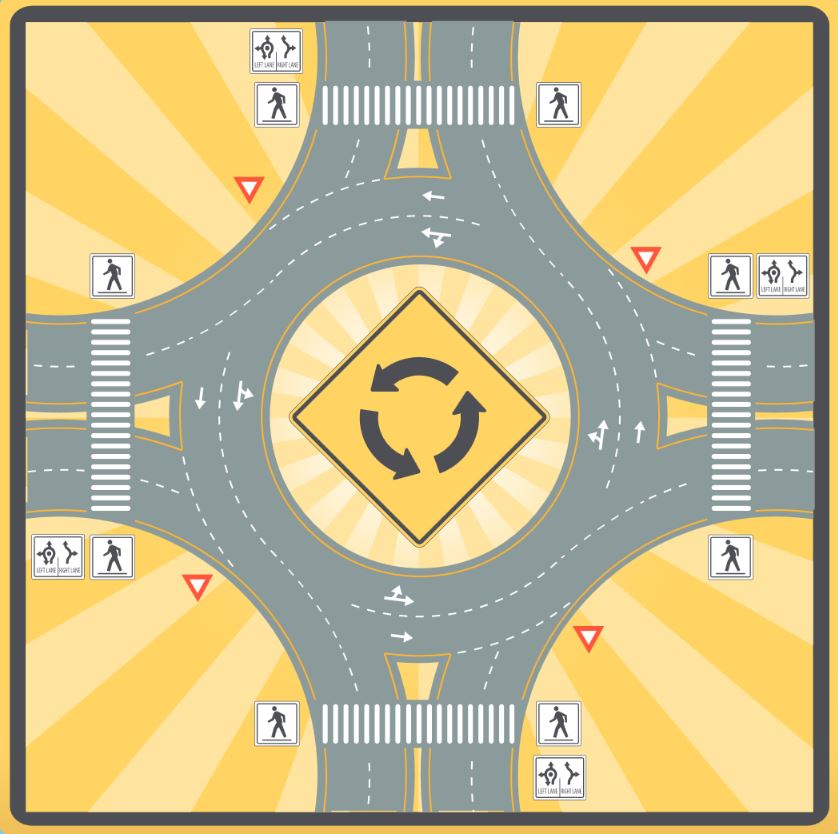 You can also check out the following helpful blogs:

>> Traffic Signal Power Outage! What Do You Do?

Have we left anything out? If so, let us know in the comments section below.