A first of its kind in Western Canada, the Alex Fraser Bridge’s counterflow system operates thanks to a distinctive piece of equipment – the zipper truck – which has arguably dethroned the bridge inspection truck as the ministry’s coolest of all tools.

Unless you’ve experienced a similar moveable barrier counterflow system south of the border – the Golden Gate Bridge in San Francisco, for instance – it may take a bit getting used to. We produced an animated video so drivers know what to expect when crossing the Highway 91 bridge.

We’ve received many good questions about the moveable barrier counterflow system; not surprising, considering it’s so new to Western Canada. We’ve collected the most frequently asked questions (and answers) here.

Why did you choose this system?

We considered other options, such as a signal-operated counterflow system like you see on the George Massey Tunnel and Lions Gate Bridge. Thing is, signal-operated systems do not provide the physical separation between oncoming traffic during counterflow operations. On the other hand, the moveable barrier system allows the median barrier to separate opposing directions of traffic at all times (score for safety!).

What is the counterflow schedule?

Did you have to do anything to the bridge to accommodate the increased traffic?

We added a seventh lane to the bridge as part of these improvements by reconfiguring the six previous lanes and removing the shoulders. The lanes were reduced in width from 3.7 metres to 3.55 metres. To help keep travellers safe and traffic flowing efficiently as part of counterflow operations, the speed limit on the bridge was permanently lowered from 90 km/h to 70 km/h.

We also strengthened the bridge to accommodate the additional weight of another lane of traffic, including bridge main span deck repairs, modifications of expansion joints and localized stiffening/strengthening of girders.

Who drives the zipper trucks?

Our maintenance contractor, Mainroad, uses two trained operators at a time to drive the trucks.

How long would it take the zipper truck to open the 4th lane?

What is the speed of the zipper truck during the barrier transfer operation on the bridge?

Up to 10 km/h while transferring barrier sections on the bridge and up to 30 km/h when it is not zipping.

Why are there two zipper trucks?

The second truck is on standby as a back up, if needed, and when routine maintenance is being performed on one of the trucks.

How does the zipper truck operate during snow conditions?

The maintenance contractor plows the snow ahead of the zipper truck operation.

Could ice get in the track? Is this system used anywhere else where the temperature drops below freezing?

There are several moveable barrier systems in eastern United States that experience cold weather, such as Philadelphia, New York and Washington DC. 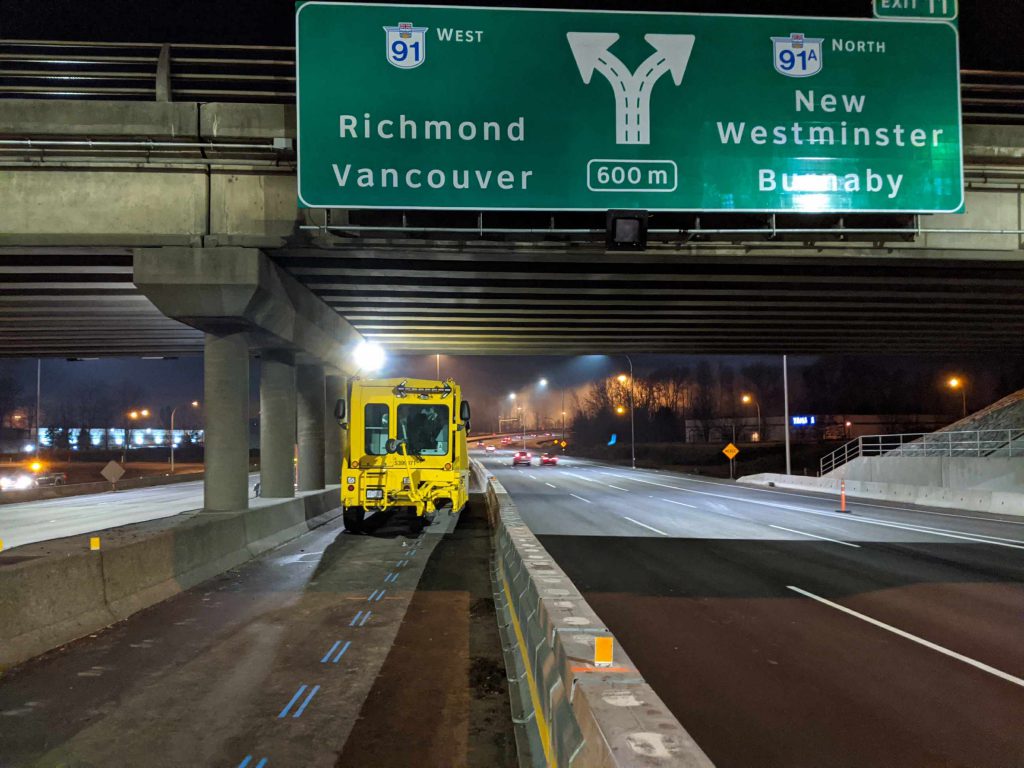 Is the truck always attached to the barrier, or does it move away from the bridge when not in use?

When the moveable barrier transfer is done, the zipper truck either parks beneath the Nordel Way overpass or the Cliveden Avenue overpass, depending on the direction of travel.

What about when there’s an incident? Can operators be reactive and move the barrier outside of scheduled counterflow times?

Yes, if required, operators can react to events that warrant a change to the counterflow schedule.

What if someone hits the barrier? How long do repairs take?

Each piece of moveable barrier can be replaced by pulling the interlocking pins out. We ordered additional barriers to have on-hand, just in case. Or, if the moveable barriers require minor straightening after being hit, it’s as simple as running the zipper truck across the length of the barriers.

So, there you have it, folks – a pretty cool tool being used to counter congestion in the Lower Mainland.

It’s worth giving the following related blogs a read, too, especially if you’re a regular commuter in the Greater Vancouver area.

Do you have a question we missed here? Ask us in the comments section below.