B.C.’s Peace Arch border crossing is inspiring Ontario to give idling the red light at some of North America’s busiest border crossings. The story began a few years ago, when Simon Leung, a program development manager with B.C.’s Ministry of Transportation and Infrastructure came up with an idea to reduce idling and emissions at busy border crossings – something he puzzled out while waiting in a border vehicle line-up with friends. Why not move the traffic up to the customs booth in batches, and encourage motorists in the group that is furthest away from customs to turn off their vehicle engines? 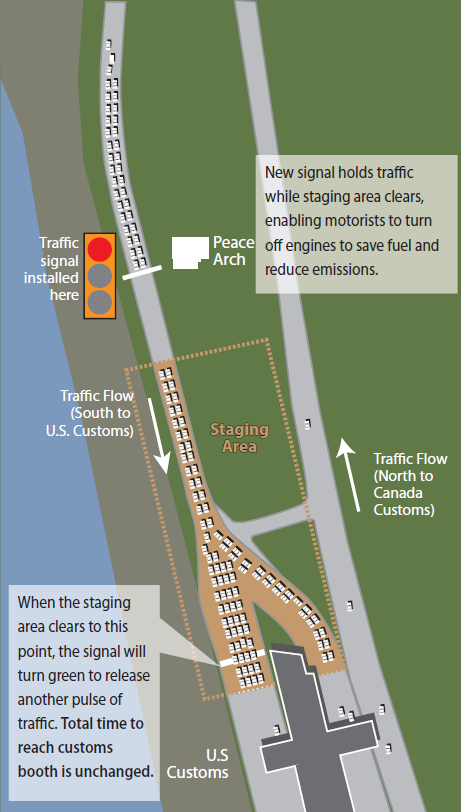 In 2008, Simon’s green idea was put into action by the ministry’s regional staff, at the Peace Arch crossing, where Highway 99 meets the State of Washington. Here, passenger vehicles (commercial trucks don’t use the crossing) that are 200 metres or further from the border agents get a red light, which signals drivers to stop and then turn off their engines. When most of the vehicles in the other group (closest to the border agents) have passed through the crossing, then the light changes to green. This signals the further group of vehicles to move ahead, and it becomes the closer group. Signs at the crossing advise drivers of the idling-reduction system, and encourage motorists to turn off their engines while in the further group.

It’s estimated that Simon’s anti-idling idea has resulted in a 45 per cent reduction of greenhouse gas emissions. Instead of the group furthest away from the booth idling for about 20 minutes as they wait to get ahead, their vehicles are turned on for only about 90 seconds, to make the move into the closer group (where they will do some idling). The wait time is the same (five to 20 minutes), motorists get fuel savings, and there’s a reduction of 1,991 tonnes of greenhouse gases per year! That’s a great benefit for the environment and owners of the 2.6 million passenger vehicles that pass southbound through the Peace Arch border every year.

Following the success of the anti-idling signals at the Peace Arch Border crossing, anti-idling signage was installed for all traffic, including commercial vehicles, heading southbound at the Pacific, Aldergrove and Huntingdon/Sumas crossings.

B.C.’s anti-idling tactics are being assessed by the Ontario Ministry of the Environment, for the three Niagara Region border crossings. According to the Niagara Falls Bridge Commission, about 7.2 million passages are expected this year, over the three bridges that cross the Niagara River between Canada and the U.S. Traffic volumes at all Ontario border crossings have steadily increased over the past few years, and border wait times during special occasions, such as long weekends, have been longer than 60 minutes.

We’re pleased that an idea from one of our ministry employees (whose mind was not idle in the border lineup) may help green Canada-U.S. borders beyond B.C. Do you have any questions about this or any other work we do? Let us know in the comments below.

If you liked this blog, check out these posts: