You’re driving a two-lane highway after a fresh dumping of snow. You spot the flashing lights of a snow plow up ahead in the left lane. You…

a) Speed up to get ready to pass in the right lane;

b) Maintain speed until you settle in close behind the plow;

c) Flash your high beams until the plow truck pulls over to let you pass;

d) Keep your distance until the plow truck pulls over to allow you to pass.

OK, so this was kind of a rhetorical question. But we’ve placed the answer at the bottom of this post for anyone who needs to confirm.

Snow plow operators are on the roads at all hours in order to make winter driving safer. Clearing snow and laying down deicers and winter abrasives requires the operators to reduce their speed. In order to operate safely, snow plow operators need fellow drivers to be extra cautious around them.

“Don’t be in a big hurry, because these guys are trying to provide a service to the travelling public. We’re not out there to hinder the flow of traffic. We’re out there trying to keep people safe.”

In the name of “Mr. Plows” everywhere (how could Homer Simpson not get a shout-out in this post?), we’ve put together a list of “do’s and don’ts” to keep in mind next time you’re driving near a snow plow.

… Give snow plows plenty of space – about 10 car lengths. Salt and winter abrasives, as well as rocks and other debris in the snow, can fly – hitting nearby vehicles and decreasing visibility. Tailgating any vehicle puts you at risk of a collision; tailgating a piece of heavy equipment armed with plows only ups the consequences.

… Pass snow plows. It’s not safe. The plow could be equipped with a wing blade on its left or right side, which can be obstructed by the snow it’s throwing. The plow also may be the first of a series of two to five more plows, staggered diagonally across the road to clear all lanes simultaneously. This practice is called Echelon Plowing, and would require the unwise driver to make multiple unsafe passes. 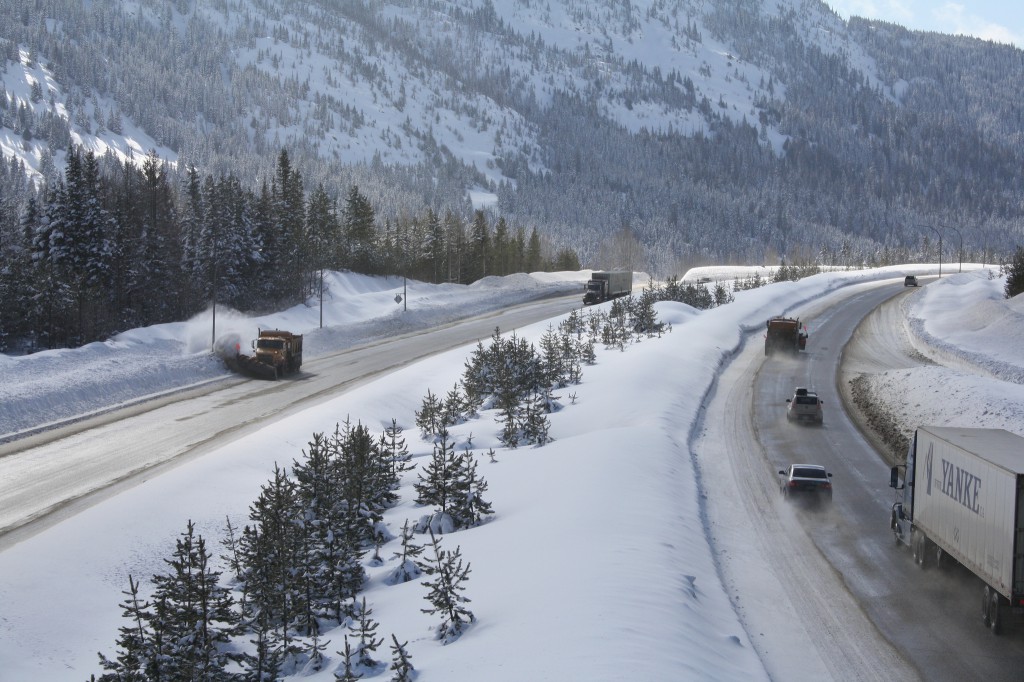 … Pull as far over to the right as is safe when you see a snow plow approaching from the opposite direction along an undivided highway. That way, you will be clear of any salt or sand.

… Assume the snow plow operator can see you, especially if you’re driving too close and visibility is poor (which it often is in snowstorms). Your best defense is to keep your distance.

… Give the snow plow operator a wave when they pull over to let you pass. They’re doing the job for you!

Do you have any tips or questions about driving near snow plows? Let us have it in the comments section below.

Quiz Answer: d) Keep your distance until the plow truck pulls over to allow you to pass. (But you knew that, right?)

48 comments on “How to Drive Around Snow Plows in BC”