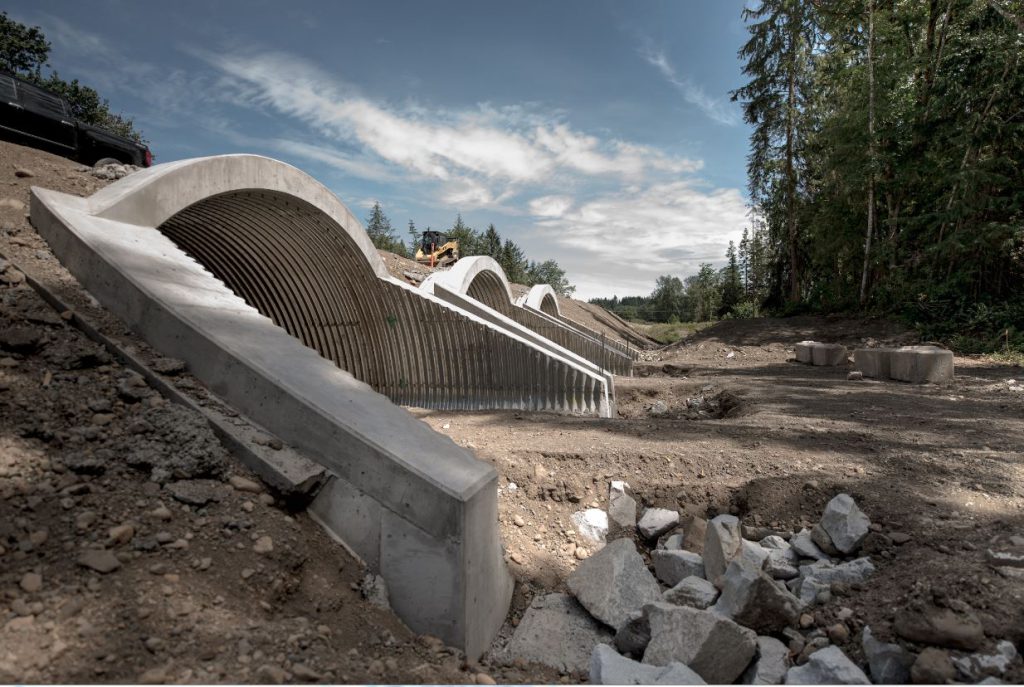 Q:  How do you keep a new bridge and road above high waters, when they cross a large floodplain that gets loads of rain and snowmelt?

This is the solution our engineers and project people reached, while working on the North Courtenay Connector, a new two-lane route that links Highway 19 with the northern part of the Comox Valley and the new hospital there.

An early design envisioned four small one-metre flood water equalization culverts, to keep the new bridge and 700 metres of new road, above the 200-year flood plain mark. However, at the March 2016 project open house, many local folks voiced concerns about the volume of water that sometimes saturates the area. When we tested different high water scenarios, using a hydraulic model, we recognized that the new section of road would actually need 11 large flood relief culverts, and the bridge would have to be five metres longer to accommodate the Tsolum River when things got extra wet.

Seven of the culverts eventually chosen are so big, you can drive a transport truck through them! At 6.25 metres wide and 3.92 metres high, their “wide-mouthed” flow capacity was ideal for the floodplain. 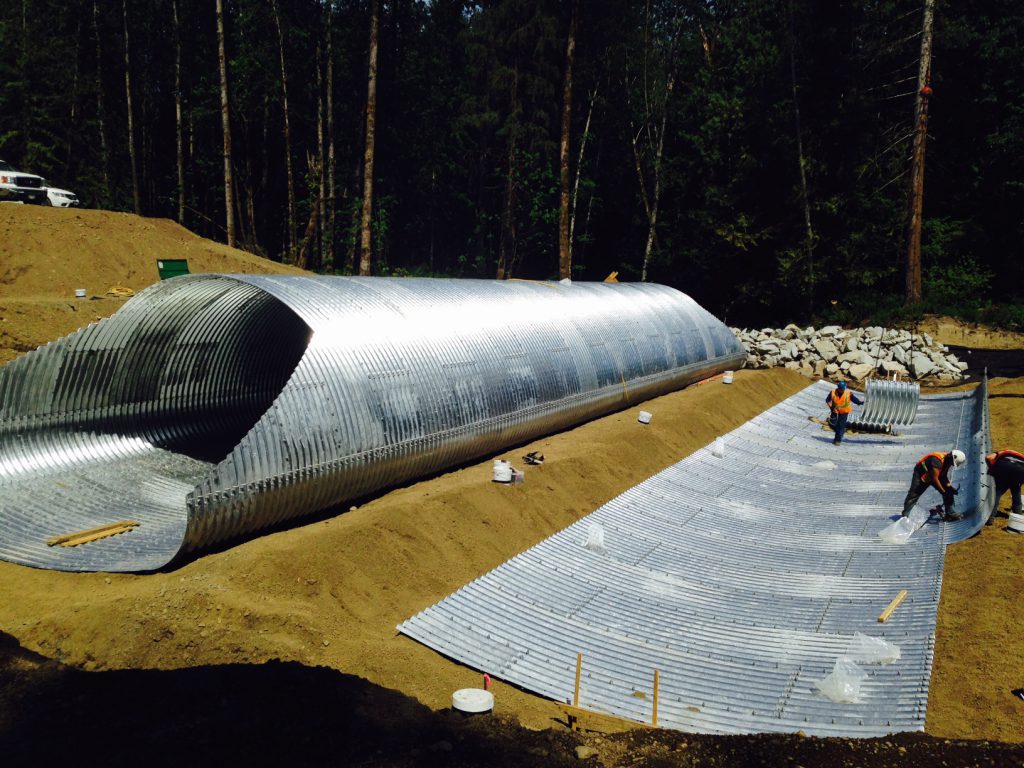 Here’s how they work… The new stretch of raised road crosses the flood plain perpendicular to the river, and can create a dam across the flood plain, when the river rises above its banks. The enormous culverts, plus four “person-sized” culverts, “equalize” the flood waters from the Tsolum River, from the upstream side of the road to the downstream side. 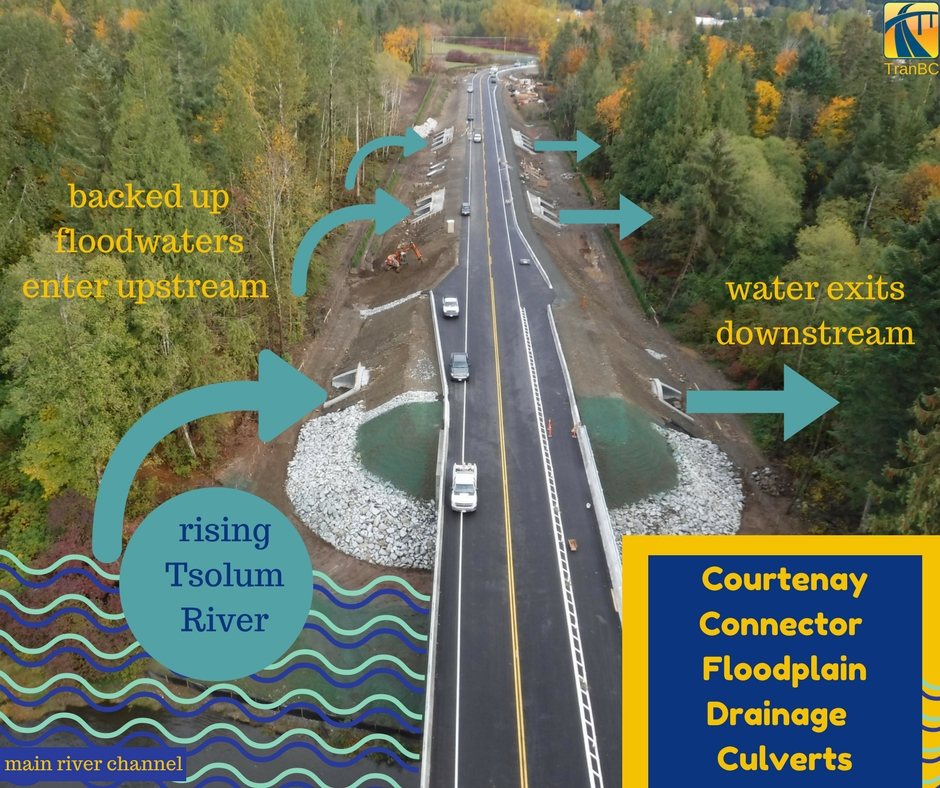 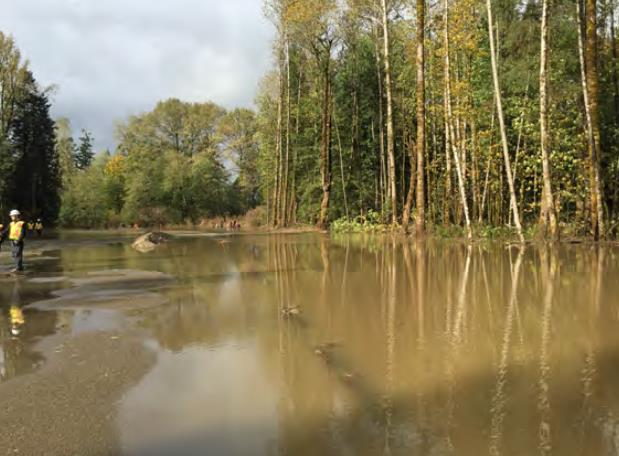 (These culverts don’t get a large influx of fast water, so the water is gradually redistributed, before slowly receding back into the river channel.)

The need for this extraordinary drainage system was further proven, in October 2016, as site preparation for the North Courtenay Connector was underway (photo at right). Four major flood events, each exceeding a one-in-20 year flood event, hit the area. The flood plain was in full action, along with our flood relief channels and ditches full of water.

In spring 2017, our construction contractor began installing the culverts, replacing the bridge, and realigning the road while adding a wider shoulder. They also put in a new multi-use path, which was funded in partnership with the Comox Valley Regional District. The Courtenay Connector opened to traffic on Oct. 20, 2017, in time for the opening of the new Comox Valley Hospital.What was once a route with a single-lane temporary Acrow bridge and signal light for single-lane alternating traffic, has been transformed into a straighter road, with a two lane bridge, improving traffic flow and safety for a growing community. Given that the North Courtenay Connector also serves as an emergency response route, it’s reassuring that when snowmelt and rain swell the Tsolum River, the excess falls mainly down the drains and into the floodplain, keeping the new road out of the sogginess and open to traffic. 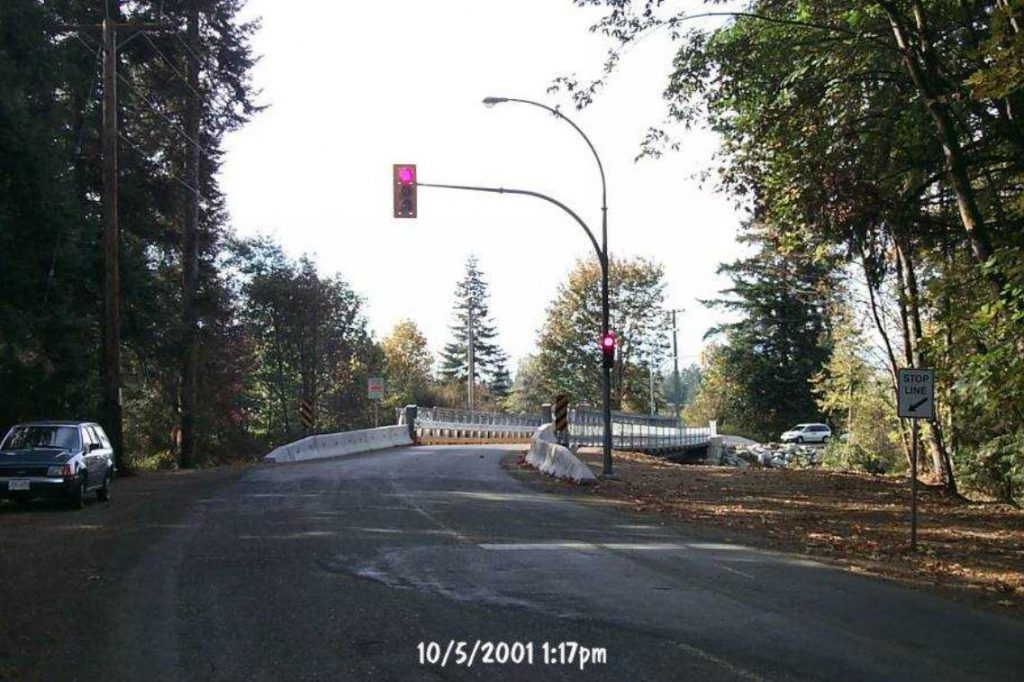 Before: The single lane alternating traffic light, at the single-lane bridge, in 2001.