The Ministry of Transportation and Infrastructure Avalanche Safety Program is changing the landscape of avalanche control in Canada.

Dropping explosives from a helicopter has traditionally been our weapon of choice for triggering controlled avalanches. But some challenging terrain on Yellowhead Highway 16, between Terrace and Prince Rupert, has compelled our avalanche team to try harnessing snow and ice rather than letting it loose.

In fall 2014, crews completed Canada’s second ever avalanche fencing installation at the 35 Mile avalanche area, located 56.4 kilometres west of Terrace (the first installation was completed as part of the Kicking Horse Canyon Project).

So, why install fencing at 35 Mile before one of the other 1,388 avalanche paths above provincial highways?

Avalanche Control in a Tight Space

Well, not all avalanche paths are created equal. Nor do they all appear as obvious scars across a mountainous treed landscape. 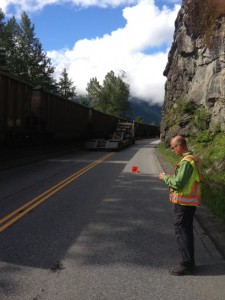 Talk about a tight space.

The area is also the most demanding location to forecast in the ministry’s Northwest Avalanche Program, which covers:

The 35 Mile avalanche area causes about 80 per cent of closure time between Terrace and Prince Rupert, and we want a permanent solution to eliminate the need to forecast and to do avalanche control work. The avalanche fencing installation is part of a trial to determine if it is an effective alternative.

Avalanche fencing stabilizes the snow in the avalanche path start zone throughout winter so the snow can never be released. The start zone is the location where snow in an avalanche path fails and results in additional amounts of snow flowing downslope. As long as snow in the start zone cannot release, there will be no avalanche. The nets are designed to hold the maximum amounts of snow that may accumulate in the start zone. The method of control is referred to as “permanent,” as it is always in place, does not need anyone or anything to initiate it, and represents a permanent solution to the concerns of avalanches. The snow eventually melts when temperatures increase.

It took 75 hours of flying to transport a 7-person crew and 82 metres of steel mesh fence 325 metres above the highway (in the video, you can spot the helicopter landing pad to the right of the worksite). The crew was flown to the helicopter pad at the beginning of each day from a nearby gravel pit, and flown out again at the end of the day.

That’s quite the commute, eh?

Working on a steep rock face requires a level head and a comprehensive safety regime. All crew members were roped in at all times and trained in rope rescue. Pre-installation rock scaling and tree falling made the area safer for installation activities. The helicopter pilots had approximately 9,000 hours flying time with extensive longline experience.

We are always looking for ways to improve traveller safety across BC. Successful avalanche fencing will not only protect travellers from falling snow and ice, it will also improve the highway’s reliability.

Page 1 of 9 comments on “Behind the Scenes: Hanging From a Rock Face for Avalanche Safety”