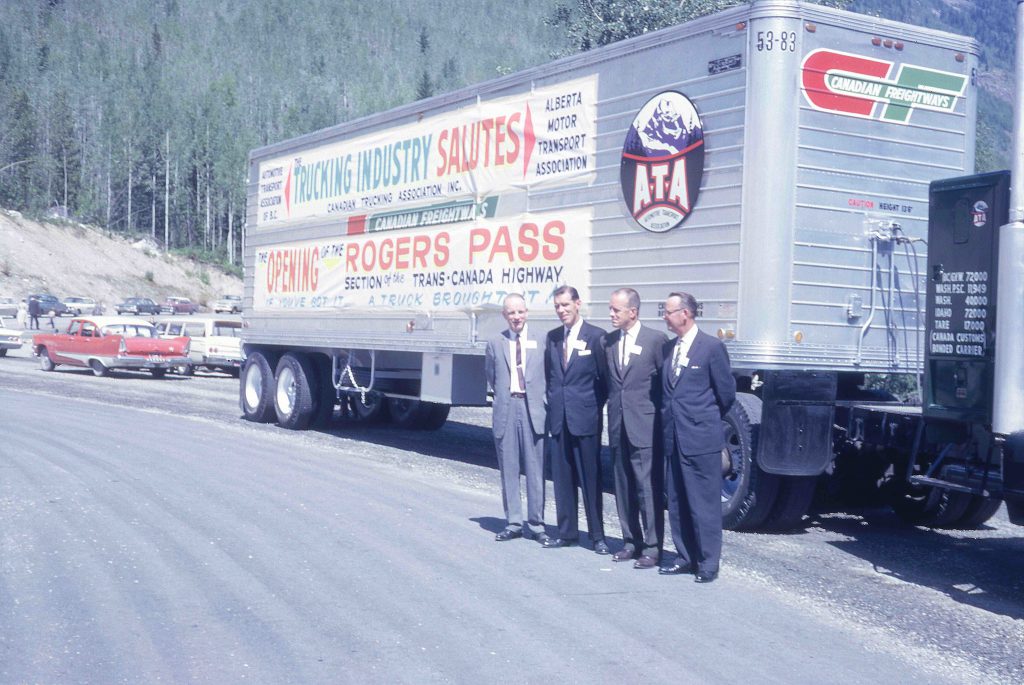 By Louise Yako, President & CEO of the BC Trucking Association (article shared courtesy of BCTA)

The Province of BC has officially recognized the importance of the trucking industry by proclaiming the first week in September, National Trucking Week in BC.

In honour of motor carriers and drivers for their vital contribution to life in this province, we’d like to share a brief story from the soon-to-be released Trucking in British Columbia: An Illustrated History (Harbour Publishing). The book contains numerous true-life stories illustrating the mettle required of the “old-timers” who tackled BC’s early roads, “winding ribbons of dirt and gravel carved out of the mountainsides.” Their courage and entrepreneurial spirit laid the foundation for a thriving BC economy, fueled by (and fueling) the growth of communities throughout the province. Today’s carriers continue the tradition of providing an indispensable service that underpins our modern lifestyle.

Here’s the story of one pioneer:

Bert Wise was a nineteen-year-old sheet metal worker in Vancouver when the Great Depression struck. Unable to find a job in his trade, he decided to go into business for himself.

Wise got into distance hauling when he was offered sixty dollars to move a family from Vancouver to Oyama, south of Vernon. On the first day he got as far up the Fraser Canyon as Boston Bar. After an overnight he drove to Spences Bridge, took a sharp right turn to Merritt, then continued via Kamloops and Vernon to his destination. After off-loading the furniture in Oyama, Wise stopped at a cannery in Ashcroft on the way back to the coast and took on a load of canned tomatoes destined for Vancouver. It was the beginning of his career as a long-haul driver.

Wise started driving for White Motor Freight, an outfit that began when three friends in Merritt traded in an old car for a Model B Ford truck to haul butchered beef down to Vancouver. The plan proved to be a money loser but the company survived for several years under different ownership. After Bert Wise signed on he carried all manner of freight: honey for a beekeeper in Vernon; dynamite; oil; barrels of pitted cherries from an orchard in Summerland; wine from Calona Wines, an enterprise started in Kelowna in 1932 by a syndicate of investors that included future premier W.A.C. Bennett; general dry goods for store owners; whatever needed hauling from the coast to the Interior or vice versa.

There was lots of competition as trucking seemed to be an attractive option for anyone who could drive and lay their hands on a vehicle. “We used to leave Vancouver with our gas tanks full,” recalled Wise, “a forty-five-gallon drum of gas on the back end and a long piece of hose to fill the tanks with later. We packed a bar of soap, a towel, toothbrush, comb, maybe a couple of dollars, and drove all night. Next day we’d unload, reload, then try to get to bed that night. In the summer we often slept in the back of the truck.”

That was the routine of the long-haul trucker during the 1930s, though pretty obviously a predictable routine was not something on which these pioneers of the road could rely. Driving a motor vehicle is not usually thought to be a physically demanding job but in the early days of trucking it was that and more. To begin with, trips were long. It could take several days to make a run to the Okanagan and back again, depending on the weather. There was no power steering so it took a strong pair of arms to wheel a truck over the winding, rutted roads that passed for highways, and an intense concentration to watch for the multiple hazards that awaited the unwary. Suspension was minimal and the solid rubber tires had very little bounce. It was the rare driver who did not develop back problems from the constant slamming and jostling.

And it was cold, at least in winter. Cabs had no heating, or defrosting. Drivers used to jam a piece of wood under the hood to keep it partly open so that heat from the engine would wash up over the windshield and keep it frost-free. After stopping for the night, the last chore was to drain the radiator so that it wouldn’t freeze and crack; of course, it had to be refilled in the morning. Black ice was a seasonal hazard. Drivers learned from experience to use their gears to descend a twisty downgrade instead of their brakes. (excerpts from “Life on the Road” pp. 101 – 104.)

Best wishes for National Trucking Week to the industry – old hands who followed in the footsteps of men like Bert Wise, new recruits, and those of you still just watching those big heavy trucks with a considering gleam in your eye.

We hope to see you all soon on the road.

BCTA is the recognized voice of the provincial motor carrier industry, representing 1,200 truck and motor coach fleets and over 250 suppliers to the industry. BCTA members operate over 13,000 vehicles, employ 26,000 people, and generate over $2 billion in revenue annually in the province.