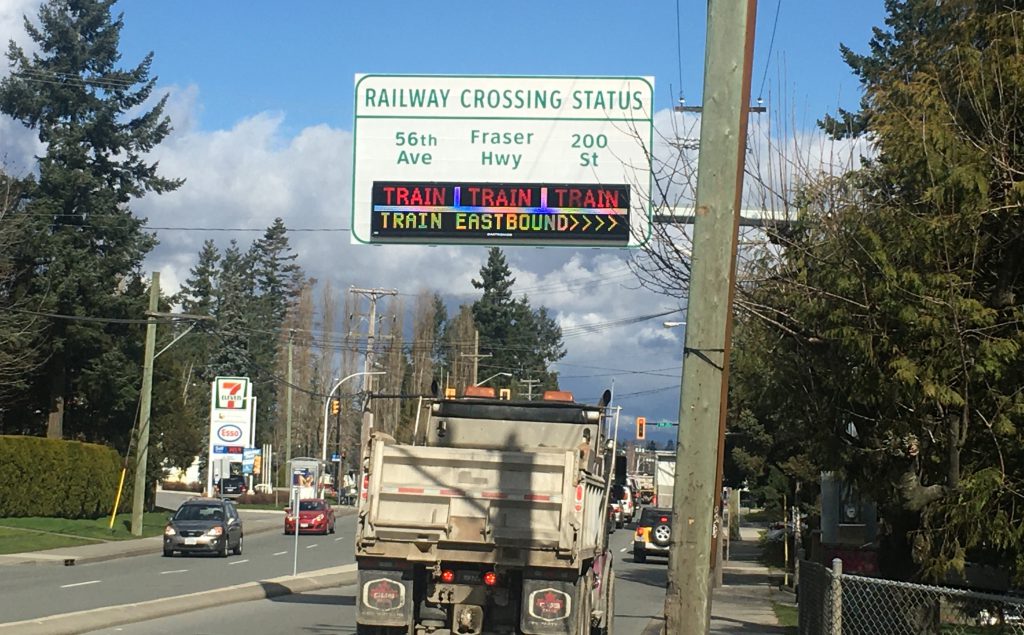 We all want traffic to keep moving—whether it’s vehicles on BC roadways, or trains transporting goods to and from our busy ports.

This can take extra ingenuity where roads and railway tracks meet, like they do along the 70-kilometre Roberts Bank Rail Corridor (RBRC). To help vehicles avoid delays there, we’ve introduced the Railway Crossing Information System (RCIS) – six digital advisory signs that tell motorists when trains are blocking nearby rail crossings, so drivers can choose another route and save time. 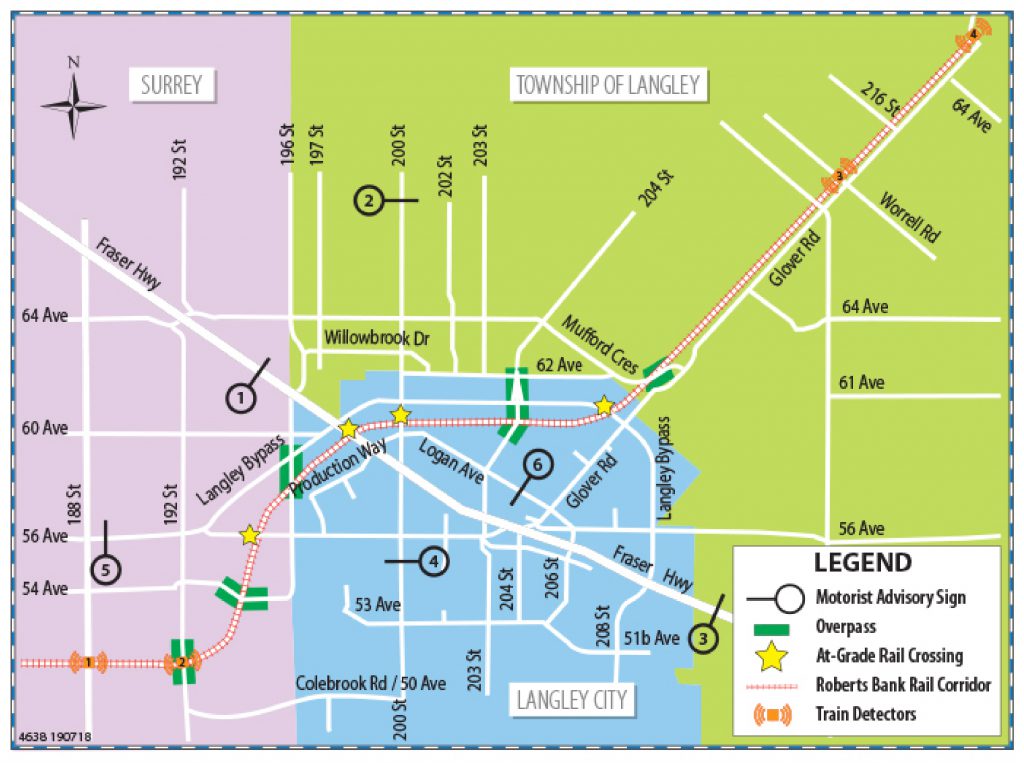 It’s important, because about 22 trains travel the RBRC daily, where they cross six major roads in Langley City, Surrey and the Township of Langley. The RBRC passes through the municipalities as it connects Deltaport, Canada’s largest container facility, with the North American rail network.

RCIS was conceived as part of the RBRC Program, which by 2014 had built nine vehicle overpasses in Delta, Surrey and Langley to separate motor vehicle traffic and trains. RCIS complements this network of overpasses in the remaining locations where there are at-grade road and rail intersections, by providing drivers with information about oncoming trains so they can better use local roads to efficiently reach their destinations.

The system is also a big plus for paramedics, police and firefighters looking to save precious minutes by taking the quickest route to emergencies.

*** Don’t be puzzled if a train passes and the signs didn’t flash a message. The RCIS only posts messages when long trains that will cause lengthy delays are detected (Detours to avoid shorter trains don’t provide significant time savings for motorists).***

Long queues can occur at railway crossings – a result of passing trains that take up to five and a half minutes to clear a crossing. After the train has passed, it can take 10 minutes or more for traffic queues and congestion to clear. Langley City estimates a 5:1 ratio of blocked railway crossing time to traffic disruption. In other words, a three-minute train blockage can equate to 15 minutes of travel delay.

With timely information now provided about train crossing status, motorists can choose more efficient alternate routes to get around trains, while reducing congestion and greenhouse gas emissions from idling vehicles.

Plenty of Partners Pulling Together

Managing road and rail traffic in this complex urban area takes the coordination and vision of many organizations and funding partners working together. The RBRC program was a collaboration funded by 12 partners representing all levels of government, the Vancouver Fraser Port Authority, TransLink and private industry. Together there was a shared focus on improving quality of life for local communities, while accommodating economic growth and movement of goods to and from markets in Canada and the world.

The RCIS is the final component of the RBRC program and is funded by Transport Canada, Vancouver Fraser Port Authority (VFPA), TransLink and the Ministry of Transportation and Infrastructure (us).

Applying Our ITS Knowledge

With our expertise in Intelligent Transportation Systems, the Ministry of Transportation and Infrastructure was selected as the lead on the RCIS project. Intelligent Transportation Systems integrate sensors, cameras, software, and telecommunication to improve the efficiency of local transportation. Our organization has been operating a variety of these systems to help travellers for more than 20 years, including the wildlife detection system, BC HighwayCams, variable speed limit signs, Weigh2GoBC and seismic and structural health monitoring of critical bridges. RCIS is the latest addition to this suite of integrated systems and is operated and maintained by the ministry in collaboration with the Langley City, Township of Langley and City of Surrey.

If you travel this area, you’ll want to get acquainted with RCIS to make the best use of the new signs (and all the work that goes on behind them). Check out the detailed maps for each of the six signs, which show the area and possible alternate routes, and the video which provides an overview of how RCIS works.