Highlighting BC highway history is important – and that doesn’t just mean shining a light on the gleaming parts of our past – it also includes bringing light to those darker parts of our history that we must learn from so we can move forward. Knowing how and why we experienced past successes and failures help us plot a better course for the future, which is why we are humbled and proud to have unveiled eight special Stop of Interest signs, commemorating the 75th anniversary of Japanese Canadian internment during the Second World War.

Working with the Japanese Legacy Committee, it was decided to highlight this piece of history with a series of eight interpretive signs and, since October 2017, they have been installed along our highways to recognize sites of historical significance for Japanese (and all) Canadians:

The final sign, unveiled on Sept 28th, 2018, is located at the Rutherford Beach rest area on Highway 1. It helps share the history of the Revelstoke-Sicamous road camp and the Japanese Canadian men who were forcibly sent to work there to build the Trans-Canada Highway during the Second World War.

In 2019, we installed a Stop of Interest sign along Highway 5, north of Blue River at the Thunder River Rest Area, to recognize Japanese Canadians sent to road camps in that area. 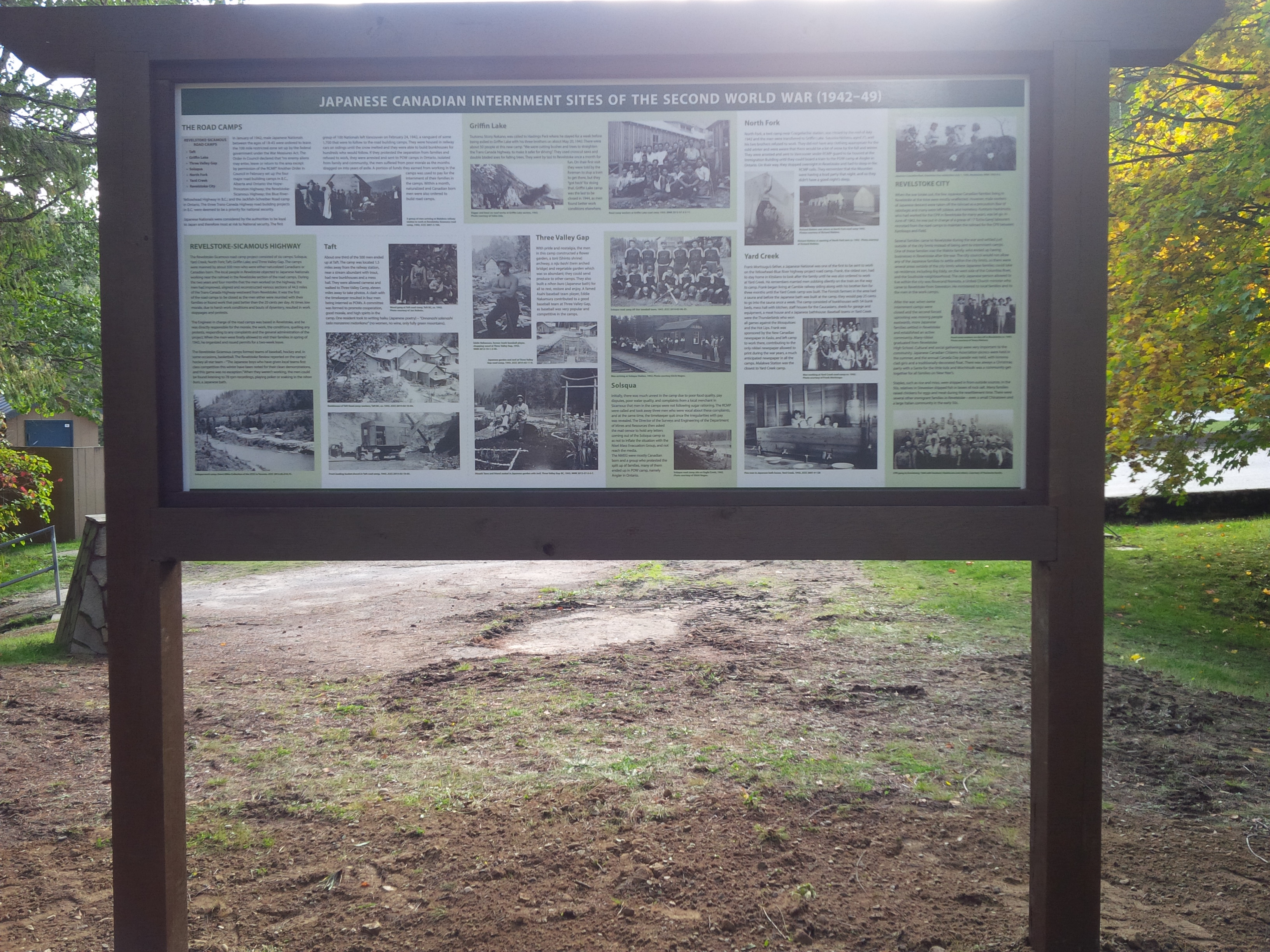 What Happened to the Japanese Canadian Community During World War II
In 1942, after Canada declared war with Japan, more than 21,000 Japanese Canadians and Canadians of Japanese ancestry were registered as “enemy aliens,” despite the fact that about half of them were naturalized Canadians or had been born in Canada. Most of these people lived in British Columbia.

The government of the day created a 100-mile (160 km) “Protected Area” along the west coast of B.C. and it was deemed to be a matter of national security that all persons of Japanese ancestry be removed from that area. The War Measures Act legislated that men between the ages of 18 and 45 would be the first to be relocated. They were sent to forced-labour road building camps in the interior of the province, where they worked for less than 25 cents per day, often in harsh conditions.

When men protested being separated from their families, they were arrested and sent to Prisoner of War camps. Women and children were left to fend for themselves as they were processed for transfer to internment camps in the interior of BC, and other locations east of the Rocky Mountains.

Lasting Impacts Post War
After the end of the war in 1945, the camps began to empty; however, many people were not permitted to, or did not want to, return to their former communities on BC’s coast because of ongoing exclusionist policies implemented by the provincial and federal governments.

It wasn’t until 1949, when the racially biased restrictive powers of the War Measures Act were rescinded, that Japanese Canadians were free to vote, live where they wanted, and to come and go as they wished. Some returned to the coast of BC, and many returned to fishing communities such as Steveston to rebuild the lives and livelihoods that had been so forcefully and traumatically taken away in 1942.

Rebuilding a sense of trust and acceptance took years but, during the 1970s there was a rebirth of Japanese culture and ethnic pride across Canada, which renewed a sense of community and strongly influenced the 1988 redress and formal apology by the federal government for all wrongs committed against Japanese Canadians during World War II.

In 2012, the Province of British Columbia extended a formal apology to Japanese-Canadians interned during the Second World War. The eight interpretive signs erected across the province are small symbols acknowledging these terrible wrongdoings, but we hope they spark important conversations about basic human rights with younger generations of British Columbians who have the terrible experience of war.

Moving Forward
“I am extremely grateful to see the completion of this highway legacy sign project,” said Laura Saimoto, chair of the Japanese Canadian Legacy Project Committee. “With the installation of these signs, we are honouring those 22,000 Japanese Canadians who were wrongfully uprooted from their homes and educating future generations about our history.”

On your next highway road trip across BC, we encourage you to stop to remember this piece of our history. 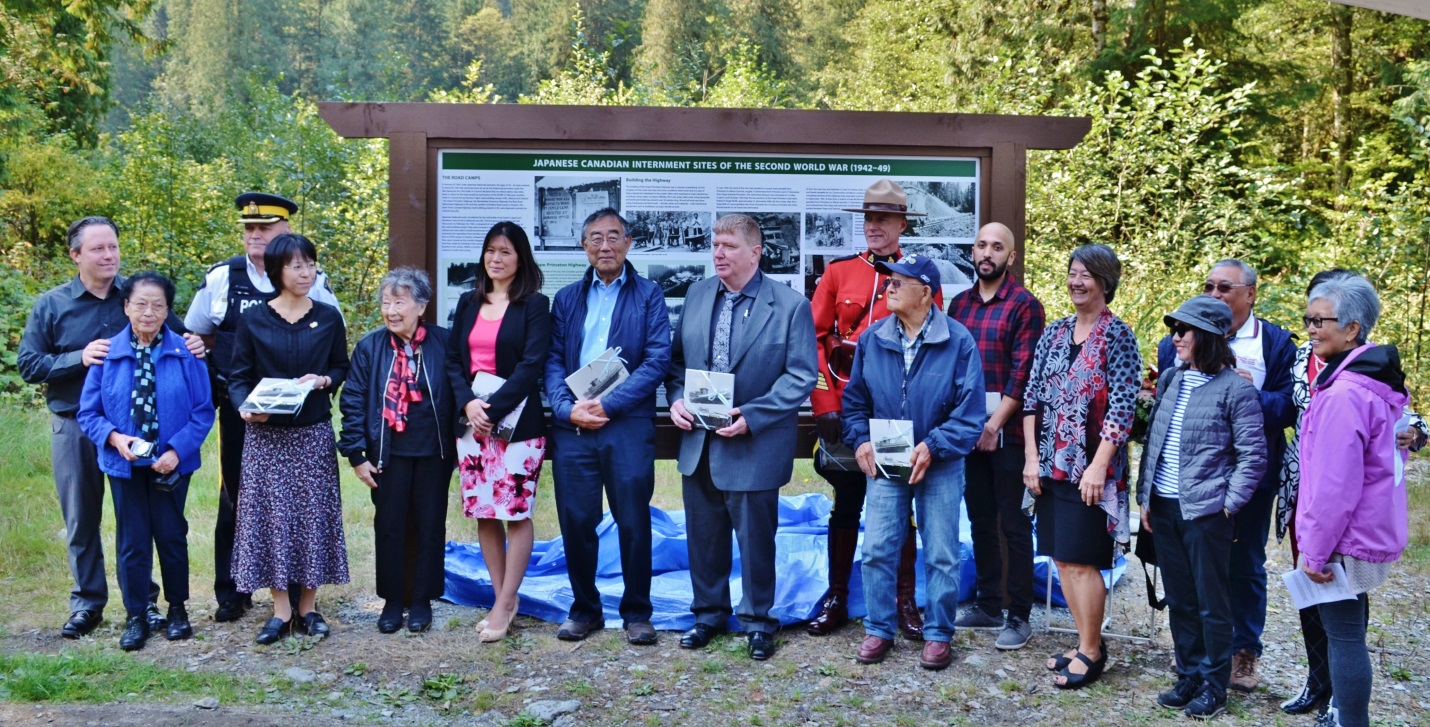 Do you have any questions about this, or anything else we do here at the Ministry of Transportation and infrastructure? Let us know in the comments below.