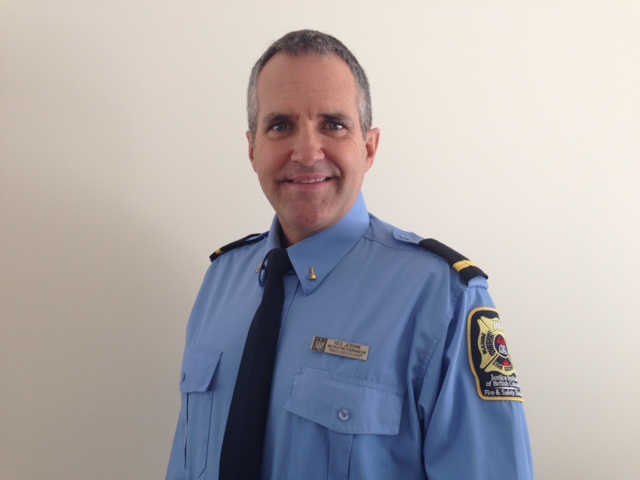 When winter hits, firefighters have to achieve a delicate balance between speed and safety. As emergency responders, their goal is to arrive on scene as fast as possible without putting themselves or other drivers at risk.This is Part 3 of a Shift Into Winter interview series exploring how various people, representing various professions, experience winter driving in B.C.

So far, we’ve talked to paramedics and a road maintenance worker, and continue with Surrey firefighter and instructor, Reo Jerome. Here are a few excerpts from our conversation:

TranBC: Thanks for taking the time to talk to us, Reo. Tell us about the multiple roles you play.

Reo: I coordinate emergency vehicle operations programs for the Fire and Safety Division at the Justice Institute of British Columbia. As well, I’m a Captain and relief Battalion Chief with the City of Surrey Fire Department.

TranBC: What are some of the safe winter driving practices you teach?

Reo: The courses that we teach at the Fire and Safety Division are for firefighters that drive a variety of different fire apparatus around the province of British Columbia. We pretty much encourage drivers to size up conditions on the roads when they’re on their way to work, thinking of the adjustments that they have to make once they get to the fire station.

As well, when the snow comes, some of the fire apparatus have chains that are attached to the fire apparatus that can be deployed at very low speeds. They’re called “Insta-Chains” and they drop down so the chains rotate under the rear tires to provide traction for the vehicle.

A lot of apparatus don’t have that equipped with them, so the firefighters have to make a decision on when they’re going to apply the chains to the tires at the station. And, of course, once an emergency call comes in, it’s too late.

Therein lies the challenge: we get called when there’s an emergency, but of course the driver’s responsibility is to keep the crew safe first so that we can then get to the emergency scene, and the crew can do what they can to help the person in need. So, it does bring about a lot of challenges.

That situation where we have chains on the apparatus and we’re not exceeding 50km/h because that main road is clear, the public sometimes gets a little impatient with us, thinking “why are they going so slow?” not realizing that we need those chains to get off on the side roads so that we can actually safely be able to get the vehicle to the people in their time of need.

So, it’s a tough place to be. It’s fine if it’s snowy for a long time and then it all just melts and goes away. But, of course, it’s all those transition periods, and in the Lower Mainland here it’s even more of a challenge because most people aren’t used to the conditions.

TranBC: Many drivers in the Lower Mainland were caught off guard by winter road conditions recently. How did you respond?

Reo: What we experienced last week in the Lower Mainland was it warmed up, and we had quite a bit of rain, which washed product off the road, and then there was an unexpected cold snap, so the roads had been wet and then they froze.

So, the fire department I’m with, and everyone in the Lower Mainland, was bombarded with just a barrage of motor vehicle accidents that started between 3 and 5am, when people started to go to work. It was a matter of: people woke up, and got in their vehicles, and did not make the necessary adjustments to the conditions, and were expecting their vehicles to operate with good traction.

We were at a couple of incidents where we really had to keep our heads up for our own safety and safety of the people that were at the initial incident that we were at. And we would always see people turning the steering wheel, but the vehicle continued to go in a straight line; the momentum, once the tires lost traction with the icy road surface, it just went in a straight line, and people were surprised by that. So, there were a lot of second and third accidents from the very first one – by people not giving enough stopping distance and lead time.

TranBC: There are common ways for people to equip their vehicles – winter tires, for example. What else can drivers do to be better prepared for these types of events?

Reo: Those things that can be done before we get these winter conditions are huge – like you say, tires -and some training. It seems like people don’t train for those winter conditions. It would be like having an Olympic athlete doing all their training in the summer and then just going in the Winter Olympics and deciding they’re going to start skiing. So, sometimes we don’t take the opportunities to do some training to know what we can expect the vehicle to do under these conditions.

If we don’t have that opportunity, making those adjustments to people’s driving behaviours is the key, and just having a different mindset of building more time in so that you know it’s going to take you longer to get places.