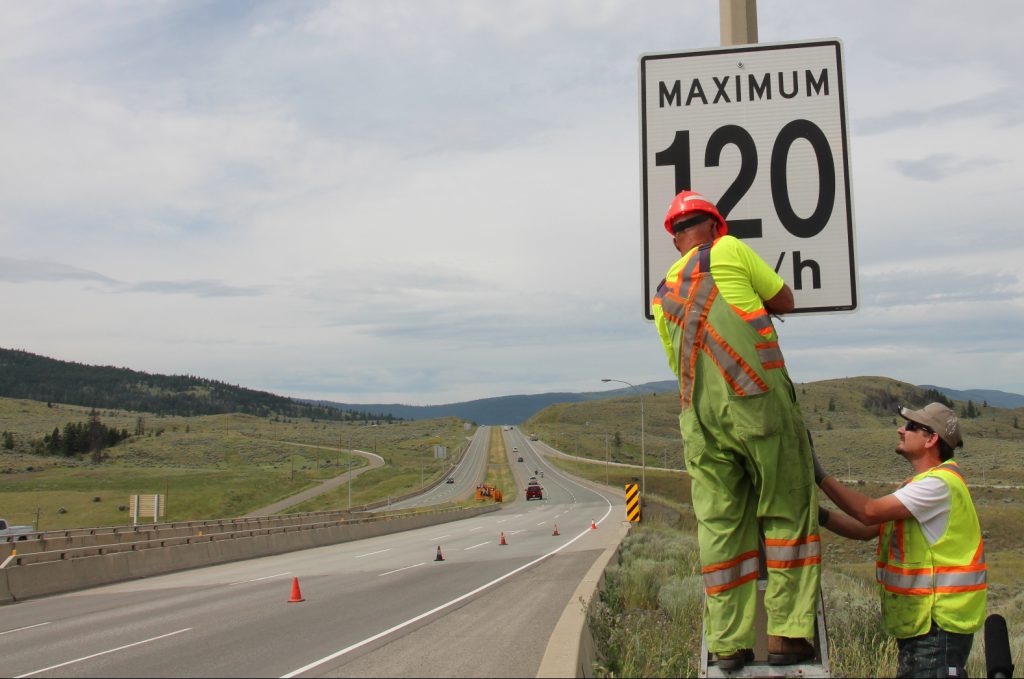 Discussions around speed limits in British Columbia accelerate every once in a while. Some people want to see higher limits, some want lower limits, and others like them just the way they are. You might even have chimed in yourself – whether through social media, a letter to an editor, or simply chatting with friends and colleagues.

The conversation certainly gets rolling on the Ministry of Transportation and Infrastructure’s Twitter and Facebook channels, which compelled us to help bring some clarity to the issue by giving an overview of how the ministry has studied and determined speed limits, using public safety as its top priority.

While the Ministry of Public Safety and Solicitor General is responsible for enforcing speed limits, our ministry sets the posted limits on provincial roadways.

Before highway construction even begins, engineers create a design according to the intended use of the roadway and the design speed. This is based on a number of engineering factors, road classifications (four-lane freeway, two-lane freeway, etc.) and others, including local land use, roadway geometry, intersection design and spacing.

The Motor Vehicle Act states that unless otherwise posted, the basic limit for all provincial highways is 80 km/h in rural environments, and 50 km/h within urban municipalities. So, if speeds other than these basic speeds are required, the ministry is tasked with setting or adjusting the limits.

Traffic engineers set speed limits according to the following factors:

Motorists’ behaviours are also taken into account when establishing a speed limit zone. Most drivers are sensible and will naturally drive at a reasonable speed to reach their destination safely. As such, the ministry uses the “majority” concept as a guiding principle for evaluating speed limits. The “majority” speed represents that speed at or below which most of the traffic is moving in ideal road conditions, and is widely accepted in North America as being closest to that “just right” speed limit motorists will comply with.

While extremely high speeds are dangerous, lowering speed limits well below the majority of travellers can also pose safety risks. Drivers become frustrated when speed limits do not reflect road characteristics, resulting in rash decisions and dangerous driving behaviour. And when drivers’ speeds vary drastically, there are more instances of unsafe passing, rear-end collisions and weaving on multi-lane roads. It’s all about finding a balance.

In some cases, the ministry reviews a highway’s speed limit after improvements are completed or as land use around the area evolves. Take parts of Highway 97 between Prince George and Cache Creek which were improved, to expand from two to four lanes and reduce curves in the road. We also reviewed and increased the speed limit from 90 km/h to 100 km/h along sections of the Trans-Canada Highway near Kamloops, Sorrento, and from Savona to Cache Creek, after they underwent safety improvements.

Speed limits do change. Design improvements can make a highway safer, and along the way to increase speed limits on sections as construction is completed.

We want to make sure highway travellers can move throughout the province efficiently and, most importantly, safely. Commissioning research and consulting with stakeholders, along with performing speed limit reviews as highways improve, is how we’ve been managing our responsibility to set speed zones on provincial highways. Discussions are healthy, and this one is likely to continue in newspapers and around dinner tables. But putting travellers at greater risk is not up for debate.

Page 1 of 135 comments on “How Speed Limits are Set in BC: The Ultimate Guide”