A wide range of characters travel BC highways. There’s the early morning commuter, mug of hot coffee at the ready. Then there’s the commercial truck driver, riding high with an elevated view of the road. There are bus drivers, convertible cruisers, road trippers and heavy haul movers. They’ve all got places to be.

But they’re not the only ones out there navigating highways.

The Ministry of Transportation and Infrastructure has a network of wildlife underpasses (we also have overpasses) available for all sorts of mammals and amphibians to safely cross highways. They seem to like them, too. How do we know? Well, we install wildlife cameras in some of the underpasses to help us track wildlife movement and behaviour. Knowing how and when various species use the underpasses allows us to better understand interspecies interactions and discover which species don’t use the underpasses. That way, we can investigate how to modify the underpasses to make them more effective.

Depending on the species of wildlife being monitored, the cameras are programmed to take a snapshot from every five seconds to every hour. They also have motion sensors to ensure we don’t miss any of the action in between. Turns out creatures are creeping and crawling through these underpasses day and night. And their travel times never seem to conflict. After all, no one wants to see a bear-squirrel traffic jam – at least not the squirrel.

To show you what we mean, we’ve picked a few shots from a single camera. Think of it as a day in the life of a wildlife underpass. 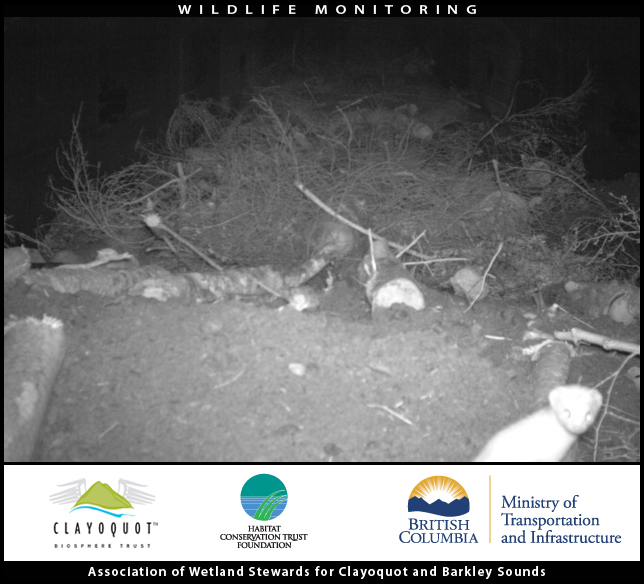 Oh, hello there little fella. We didn’t expect to see you here. This is an ermine, also known as a stoat, captured on camera in the wee early morning hours. Ermine sightings are actually quite rare, which made this capture extra exciting. Fun fact: Queen Elizabeth I was painted with an ermine on her arm. 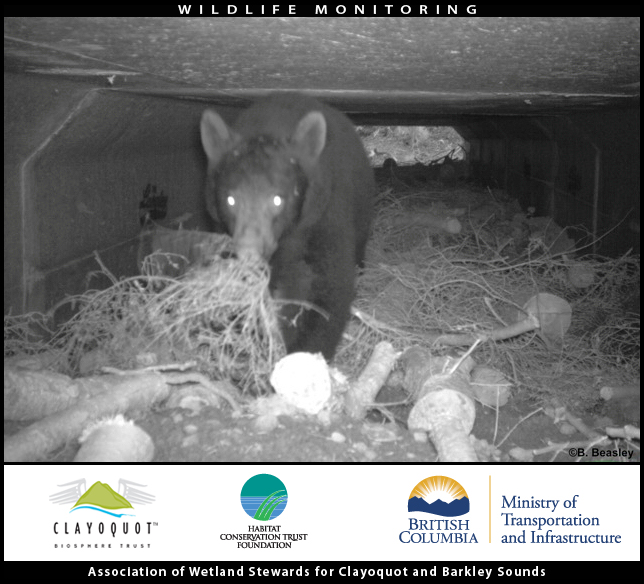 Probably the largest creature to travel the underpass, this black bear lumbers through just as the sun begins to rise. 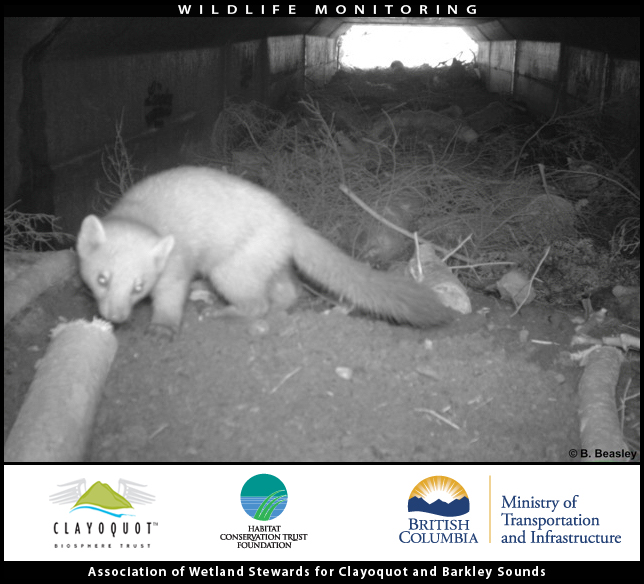 This marten is using the underpass during its mid-afternoon travels. 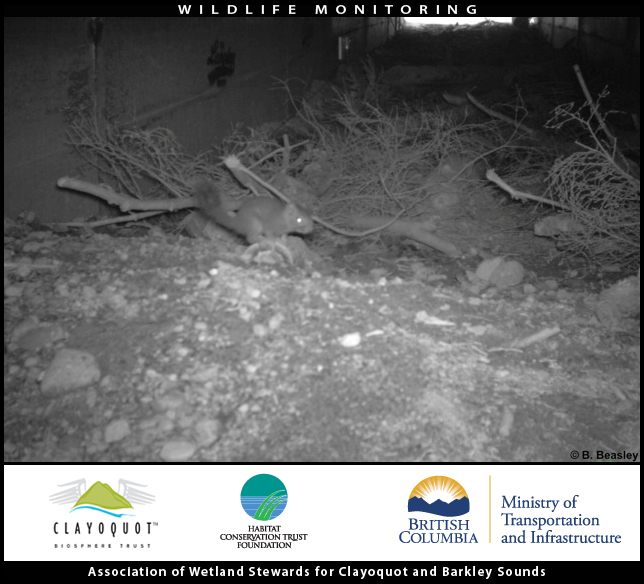 While most of us are having dinner, this squirrel quickly scrambles through the underpass. These critters can be very active. In fact, one squirrel has been spotted running back and forth a few times during the day with nuts and other objects in its mouth. 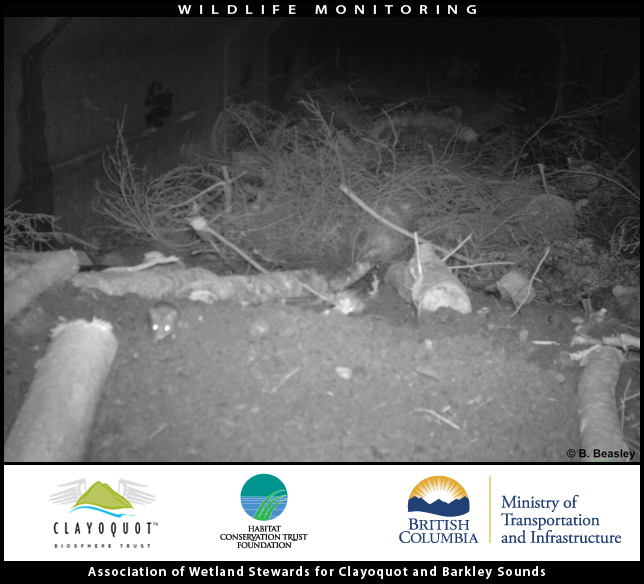 Say cheese, little buddy. Can you pick out this mouse, which was seen skittering across later in the evening? Good thing the camera’s flash lights up the eyes, or else it might just blend in. Of course, with predators such as ermines and minks in the area, blending in isn’t a bad idea. 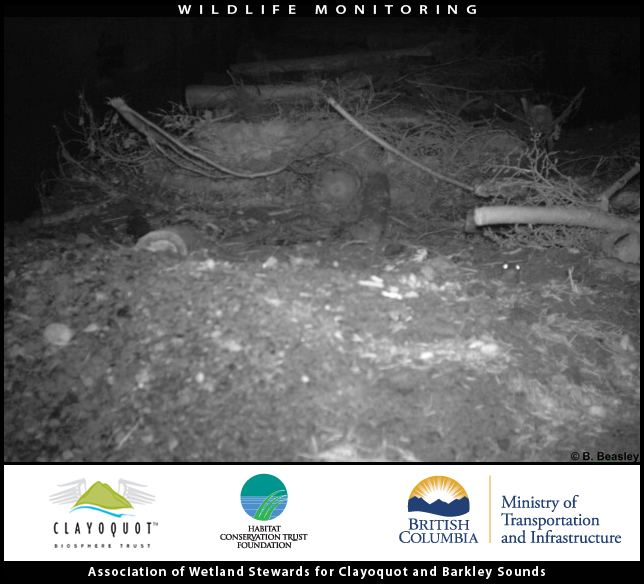 Where’s Waldo? Actually, his scientific name is Rana aurora, and he’s a northern red-legged frog. Our wildlife cameras captured him, along with a few of his buddies, hopping through the underpass late one night. The underpasses help this and other amphibians cross the highway during mass migrations.

Can you think of any other amphibians and mammals that likely use B.C. highway wildlife underpasses?

These images are captured in the name of serious research. But for a giggle, check out a couple outtakes: 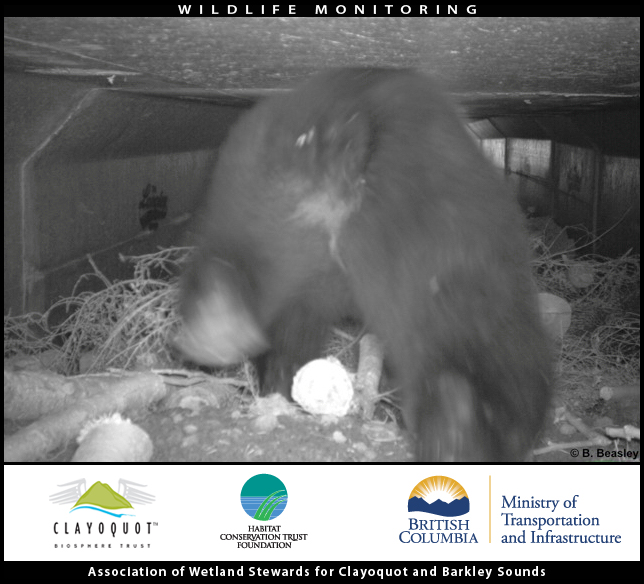 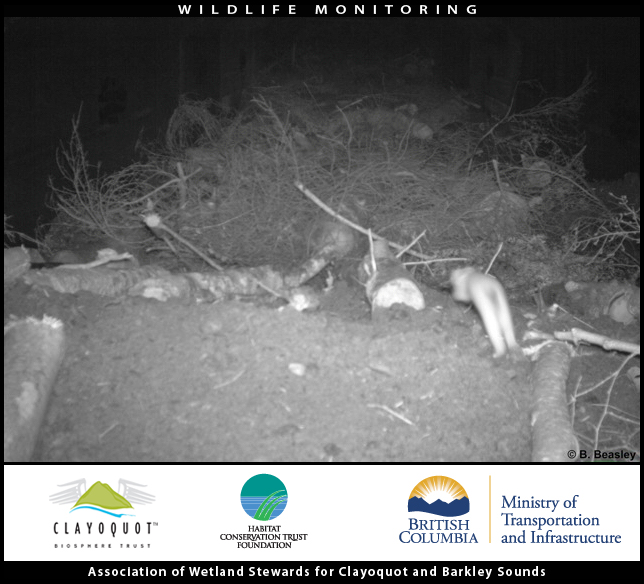