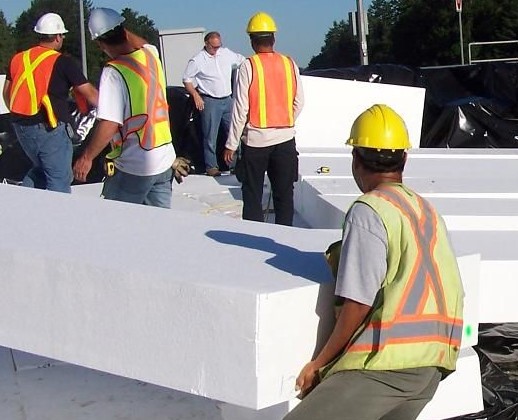 From pillows to pads, toys and insulation, foam is everywhere. But did you know we also use it a lot in construction? The engineers call it expanded polystyrene or extruded polystyrene, but if you’re looking for a label that’s easier to remember, it’s also commonly called, “geofoam”.

One of the first times we used geofoam on a major project was at the Swan Lake Overhead in Vernon in 1997 to help with slope stabilization on soft clay soil. Since then, we’ve used it on a lot of projects, especially bridge abutments and approaches, like on the William R. Bennett Bridge and the Alex Fraser Bridge. If you’d like to see more pictures of crews using geofoam, check out our Flickr page.

It’s much like the foam used to make coffee cups, and it has a lot of advantages. First, it’s very light weight – up to 50 times lighter than other common fill materials that have a similar strength. It’s also very easy to work with. Blocks can be cut with nothing more than a hot wire, and because it weighs so little, the blocks can be moved and placed by hand, which also reduces construction costs.

Its weight plays other important roles, too, other than just being easy to work with. When we build roads and bridges, we need to take into account the type of ground we’re building on. If it’s very soft, we have to be careful about how heavy we make things, because it can become too much for the ground to support, and the construction could sink or become unstable. It’s situations like that where geofoam really shines.

But like any material, it has its challenges, one of them being buoyancy. When using geofoam, engineers have to design the project around the surrounding water levels to make sure the foam blocks won’t float out of place. The foam is also flammable and can be dissolved by common solvents, like gasoline. So to protect it, it’s covered by a plastic membrane and buried before concrete is put down on top of it.

It may not be as common as concrete and steel in our construction, but sometimes nothing else will work as well as foam. So the next time you’re coming up to a bridge, there’s a good chance you could be driving on more than just asphalt and earth.