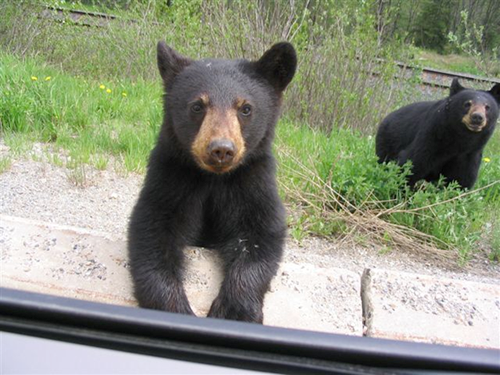 We are always looking for ways to be bear aware and reduce danger to wildlife, big and small, along our highways.

Ways We Help With Bear (And Your) Safety

Here are some ways we help increase motorist (and animal) safety:

Two initiatives put in place to increase the safety of motorists and wildlife on Highway 99 (also known as the Sea to Sky).

In 2012, we saw a large increase in the number of bears foraging for food near our roads due, in large part, to the late snow melt and this activity has been particularly prevalent along the Highway 99 corridor between Squamish and Whistler. The rise in foraging bears also meant a rise in traffic jams or “bear jams” of motorists who were slowing down to view the wildlife; however, slowing down to view wildlife was creating a hazard for the bears and motorists. We have been working with a number of concerned residents and organizations in the area to try and ease some of the issues around “bear jams” and wildlife viewing.

We have taken two approaches to reduce the risk to motorists and to wildlife. The first, installing vegetative screening at Culliton Creek Bridge. Culliton Creek Bridge was identified as a high hazard area with numerous bear sightings and consequent “bear jams” from vehicles slowing down and/or pulling over to view wildlife. A total of 45 cedar trees were planted along the east side of Highway 99 by the Culliton Creek Bridge to act as a visual screen preventing commuters from stopping and viewing wildlife.

Planting trees along the eastside of the bridge, at both the north and south ends, provides a visual screen to any wildlife that might be foraging. This tree planting initiative will hopefully keep both humans and wildlife free from conflict. We like to call that a win-win.

The second approach we took in reducing conflict was designing and installing five bear warning signs between Squamish and Whistler along Highway 99 – the first of their kind in British Columbia.

The District of Squamish partnered with the ministry and its maintenance contractor, Miller Capilano Maintenance Corporation, to install the signs in strategic locations along the Highway 99 corridor from Squamish to Whistler (including signs heading up to the Callaghan Valley).

The signs were specially designed for this area by the Ministry of Transportation and Infrastructure. Given the heightened level of bear activity and the use of the corridor by a large number of visitors from outside the province and country who may not be aware of, or familiar with the potential threat of bears, we felt the signs were warranted for this specific location. By not stopping to view (or feed) wildlife, we can reduce human-bear conflicts and vehicle-bear accidents.

What You Can Do

How can you reduce the risk of having a run in with wildlife on the highway?

Bears and other wildlife are treasures to preserve, by working together we can make sure they stay safe.