When most people think of those who work roadside in Cone Zones, they think construction workers and the flaggers taking care of traffic control. But there’s a long list of other workers whose safety depends on drivers being safe and courteous.

Yes, those guys and gals beautifying gardens and lawns in and around commercial and residential areas rely on Cone Zones too, especially when loading and unloading equipment.

We recently chatted with Brian Ramor, owner of Think Green Landscaping in Vancouver, to get an idea of what it’s like to be a landscaper in the Cone Zone.

TranBC: Hi Brian. What can drivers expect to see you and your employees doing on or near the roadside?

Brian: Basically cutting lawns, picking up litter, loading and unloading trucks on the shoulder of the road, sometimes even operating machinery on the side of road.

Brian: We try to be active participants with the Cone Zone. We try to be more visible. For example, right now we do some watering at night for some properties, and in the wintertime, sometimes we aren’t finished loading when the sun goes down. So, we just got new cones with the reflective stripe for as soon as it gets dark.

TranBC: Do you find drivers always appreciate that you are roadside workers that need space?

Brian: No. Sometimes it seems they want to get as close as possible to us and the cones.

TranBC: Why do you think that is? Is it a distraction issue? A lack of respect? 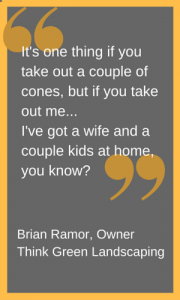 Brian: I would say it’s a little bit of both. Some people may lack respect, or maybe they don’t have a job where they stand roadside, so they have a different perspective. If there was a reversal of roles, maybe they would respect and slow down, and give a bit more space. And, of course, there are still people on their phones.

TranBC: Have you ever experienced a close call?

Brian: Yes, just a couple weeks ago. I don’t know how it didn’t hit my hand. It was a car turning into a subdivision. We had cones set up, and I was actually in the coned area, and this car cut the corner really tight. They seemed to be in a rush and they just didn’t care.

TranBC: You’re a driver, too. What are some of the things that you look out for when approaching Cone Zones?

Brian: I think eye contact is important. You know, what is the worker doing? What is being loaded on and off? And watch behind you as you slow down to make sure the car behind you is also slowing down.

TranBC: We really appreciate hearing your thoughts. Any final message to drivers?

Do you, or someone close to you, work roadside? What do you want drivers to keep in mind?