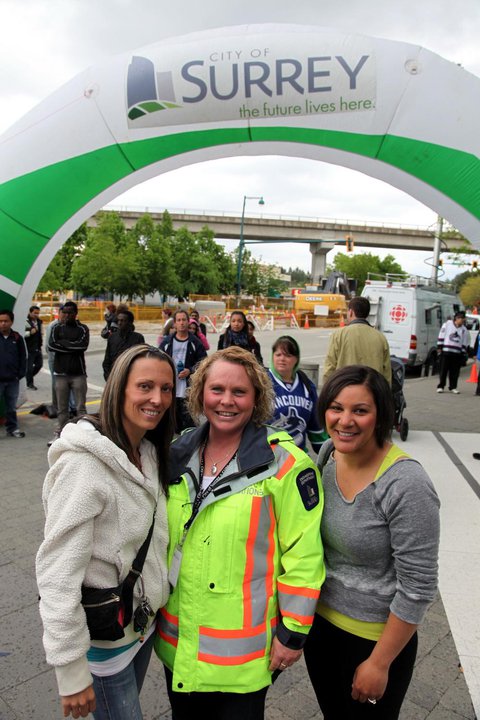 If you’ve been to a special event in Surrey, chances are Kathie Haidon was on scene making sure it was running smoothly.

Since traffic management and road safety is such a focus for Kathie, we recently chatted about roadside worker safety, responsibilities, and what it takes to keep drivers and roadside workers safe in cone zones.

TranBC: Hi Kathie. Let’s start by going over some of your experience.

Kathie Haidon: I would say half my time is reviewing, approving, working with contractors or vendors who want to bring a special event to Surrey, and the other half is spent in the field, doing site inspections, attending special events, planning and coordinating all our City of Surrey events, as well as working with contractors to help them come up with plans that will meet our needs and theirs.

My background has always been traffic control. I started out as a flagger when I was 15 for my parents’ construction company. Over the years, I progressed to owning a company, to selling a company, to going back to university and getting a degree in business, which ultimately led me to City of Surrey. So, I’ve seen all perspectives: from an owner, city worker, and an actual employee who flagged for many years.

What kinds of traffic operations activities does the City of Surrey oversee?

We oversee quite a few. Outside of engineering operations, which takes care of all our water, our sewer, our patch and pave program, street lamping, multiple things, we oversee general design and construction – both internally and externally – so anyone who wants to do any kind of construction, from a sidewalk repair outside a house, to building a high rise – it would all come through my department.

How do these activities rely on “cone zones?”

We rely on cone zones quite heavily. Everything that we do on the road has to adhere to a traffic management plan. When somebody wants to come in and do work on the road, we ask for a site specific traffic management plan. We take into account signals, bus stops, bike lanes traffic flow, volume, all those dictate what times we allow then to work and other safety factors. Everything we do is based on a cone zone.

Does the Slow Down Move Over law affect your workers?

It does affect our workers, particularly where speed limits are 70 km/h in Surrey, along 152nd and stretches of Fraser Highway.

What road safety training do employees who work on or near roads receive? How important is this training?

Our employees received a basic four-hour traffic awareness program. It doesn’t certify them to do traffic control but it does bring them to understand the dangers. The focus of that four-hour training is to give them the tools to perform a risk assessment and determine when they should be using traffic control or when it’s safe for them to implement a shoulder closure. Very few of our crews do full lane closures; the ones that do have taken the full traffic management course and are fully certified.

We’re quite diligent about ongoing training. We work with people, show up to job sites, tell them what’s good about their setup and explain what’s wrong with the setup.

Have you received reports of collisions or near misses in Surrey cone zones?

I have. Recently, there was a large hydro project that was taking place, and there were quite a few issues on that jobsite. Surprisingly, it was residential with a lot of local traffic that was causing most of the problem. People were getting frustrated with having this construction inhibit them from getting to and from their home or school, and not taking the time to be cautious when going through these cone zones.

I find people get quite annoyed. It’s typically the jobs that are three or four months long, and people have just had enough at some point. But that doesn’t excuse the behaviour.

And it’s a two-way street. Sometimes traffic control or other roadside workers get complacent and don’t always take the necessary cautions. It could just be adding that additional sign or making that *taper a little bit longer to increase their safety. I think it’s a work in progress for all parties involved.

* Taper: The gradual narrowing of a lane or shoulder using successive cones or markers to safely guide drivers into the next lane.

Protecting roadside workers is simple: slow down, stay alert and show respect… What do you think is preventing some people from driving safely in cone zones?

I think people should keep in mind that everyone has the right to return home from work safely at the end of every day, whether you have a desk position or you’re a traffic controller, or emergency response person.

Anything else you would like to say about the importance of roadside worker safety and cone zones?

This is our busy time of year. I think workers tend to forget to take a step back, make sure they’re drinking lots of water, make sure they’re checking their zones and they are staying properly setup. And taking breaks… I know it’s hard as a roadside worker, but you have to make that effort to sit down for a few minutes and keep your mental stability going, especially during long days in heat.

Do you, or someone close to you, work roadside? What do you want drivers to keep in mind? Let us know in the comments section below.