We get a lot of questions and comments about cycling safety here at the Ministry of Transportation and Infrastructure, so in our ongoing effort to improve the safety of cyclists (and other travellers), here’s another important reminder to look out for them and explain why you might see them riding in front of you as you drive.

Often, there’s a bike lane or shoulder for cyclists to ride on, so they’re out of the way of traffic, and it’s easy to drive by them. But sometimes it’s not practicable for a cyclist to ride out of the way or even near the right side of the lane.

There could be a number of different reasons for this, but usually it’s because the lane is too narrow to let them move over safely. Sometimes this isn’t obvious. In the picture above, for example, a car should be able to squeeze by a cyclist, as long as the cyclist is riding well to the right.

But consider this: your average car door extends about a metre or so from the vehicle. That means cyclists need to keep a minimum of one metre between them and any parked car. That helps them avoid being doored, which is about as much fun as it sounds.

So what about when there’s a gap between parked cars, like in the picture below? Shouldn’t the cyclist move over and let cars past? 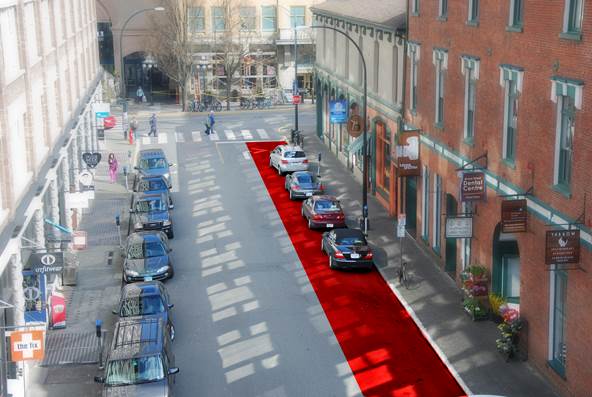 Actually, no. If it’s just a small gap, the safest thing for a cyclist to do is to ride in a predictable manner. That means riding a straight line, out of the range of any car doors and in the lane with regular traffic.

All this isn’t to say cyclists should always be riding with motor vehicles. Since cyclists are generally slower than other vehicles, they need to be moving over and letting traffic past whenever it’s safe to do so.

Page 1 of 10 comments on “Why is that Cyclist in my Lane? A Question of Cycling Safety”