We’ve just pedalled off the ferry on our “Tour de BC,” which began on Vancouver Island and Northern BC in Part 1. We’ll continue exploring some of the province’s latest cycling trail and pathway projects in celebration of Go By Bike Week, starting on Vancouver’s North Shore and finishing up in the Southern Interior. So, hop on and let’s go!

North Vancouver… it’s rainy, sure, but it’s also the place of beautiful forests, cool streams and mountain trails. But the North Shore isn’t simply the birthplace of freeride mountain biking, it’s evolving into a more commuter-friendly community with the ongoing construction of the North Shore Spirit Trail.

The 35-kilometre waterfront trail will eventually connect Horseshoe Bay and BC Ferries with the seaside neighbourhood of Deep Cove. Open to cyclists and pedestrians alike, the trail will provide access to the SeaBus, the Lions Gate Bridge and the Second Narrows Bridge along the way.

Now that the North Shore Spirit Trail has led you across the Burrard Inlet, our pedalling journey continues with the Central Valley Greenway, a 25-kilometre path linking Vancouver, Burnaby and New Westminster.

Besides connecting neighbourhoods with businesses centres, the greenway also links to 10 SkyTrain stations and 23 bus routes, if you need to take a break from all that pedalling. And if you feel like getting off the bike for a picnic or a stroll, the greenway provides access to popular recreational destinations such as Burnaby Lake Regional Park, New Westminster Quay and Stanley Park. Here’s a glimpse of the regional route.

Bike to Work Week means biking to school for many of us. To improve safety for cyclists hitting the books at the UBC campus in Kelowna, a cyclist-activated sign lets 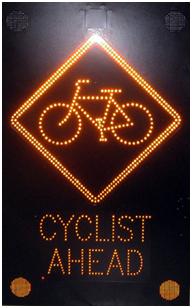 drivers know bikers are on the bridge’s narrow shoulder.

To improve safety for the future, the ministry and the City of Kelowna are working together to have a preliminary design done for a new 1.5-kilometre long, four-metre wide multi-use pathway to cross over both Highway 97 and the CN railway tracks.

Educate yourself with this map of the cycling route.

First known as the Trail Creek Trail, the Lui Joe Trail meanders through a pleasant ravine in Lower Rossland’s historic Chinese Gardens area and includes a new bridge. The trail is named after a Chinese vegetable grower who cultivated the land in the mid 1900s and was often seen carrying his goods to town. The ministry contributed grant funding for the trail, which connects Washington Street and Redstone Drive, through the Cycling Infrastructure Partnerships Program.

We understand it takes willpower to harness your pedal power to work every day. Here’s some food for thought that may strengthen your resolve: cycling 10 kilometres to and from work every day reduces your greenhouse gas emissions by about 15,000 kilograms a year. Two-wheeled commuting is also a great form of exercise and eases the pain at the pump… big time.

It’s our job as the Ministry of Transportation and Infrastructure, along with local communities, to help make your path to work as smooth as possible. The rest is up to you. So, what will it be?