Winter doesn’t mess with the Lower Mainland all too often. But when it does, our maintenance efforts go beyond the standard plowing and sanding of highways. Our attention is also drawn skyward to the cables on the Alex Fraser Bridge and Port Mann Bridge.

Snow and ice can build up around the cables that support the bridges, becoming a safety hazard to traffic below if left to freeze, melt and potentially fall. To combat the risk, we developed cable collar systems that prevent snow and ice from forming and falling.

During a winter event, Rope Access Technicians (affectionately known as RATS) release the collars from the top of the cables – manually by rope access on the Alex Fraser Bridge, or remotely, as is the case with the Port Mann Bridge. The collars, which are basically chains that fit around the bridge cables, remove snow and ice as they move down the length of the cables. Think of the collars as specially-designed scrapers.

See what a collar drop looks like on the Alex Fraser Bridge:

People have asked us: “doesn’t this damage the cables?” The chains slide on the protective cable sheathing, not on the structural steel cables themselves. Wear on the cable coatings is minimal and monitored.

When it’s time to reload, the technicians manually detach the collars from the cables, move them to the towers, and hoist them back up to the top of the cables using lifting bridles via winch and davits (crane-like devices) mounted on the bridge towers.

What it Means for You 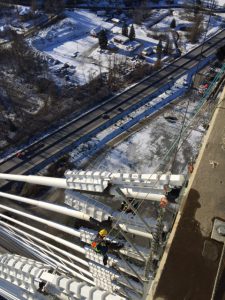 As a safety precaution, we must temporarily close the outside bridge lanes closest to the cables when dropping and reloading the cable collars. In the Port Mann’s case, these are the HOV lanes.

For reloading, we choose a time when lane closures will have a minimum impact to traffic. However, we don’t have as much flexibility when choosing when to release the collars because it depends largely on the forecast and current weather conditions.

Depending on the snow accumulation on the bridge deck during the closure, our maintenance contractor may need to plow before we can safely reopen the lanes to regular traffic.

What About Heating the Cables?

Some of you have wondered: “couldn’t we avoid lanes closures by simply heating the cables?” Heating the cables isn’t as simple as it sounds. We’ve looked into it, and we’re not aware of any other cable bridge in the world that has successfully used heated cables to address snow and ice build-up.

There is a huge surface area of each of the cables that would have to be heated (for example, there are 26 kilometres of cables on the Alex Fraser Bridge). With the wind, rain and snow hitting the cables, the heat loss would be tremendous, and providing the immense amount of energy needed would not be practical. Ice would also form outside the heated section of the cables, defeating the purpose. Based on the research we did when exploring snow and ice clearing technologies for the Port Mann Bridge, the power needed to heat the cables for just one hour could run a small community. Heat from such a system would also damage the cables’ protective sheathing.

The risk of falling ice and snow on the bridges – even the Alex Fraser, which is more than 30 years old –  is relatively new. Most years, very little snow accumulates on the cables, or the majority of snow is light and blows off before accumulating enough to pose a threat. In fact, the three temporary closures that happened in the winter of 2016-17 were the very first on the Alex Fraser due to snow/ice forming on the cables.

Sometimes, a combination of factors can lead to the build up of snow and ice:  the type of snow, temperatures fluctuating around freezing and making the snow wet and heavy, a high range of temperatures that quickly heats the cables, as well as wind direction.

But with these cable collar systems in place, we can contend with whatever conditions nature throws at us.

Got a question about the cable collar systems that we didn’t answer here? Comment below.