Much like naively donning shorts and a t-shirt at the slightest sign of spring, the temptation to swap out winter tires can be strong. But be careful: the consequences of prematurely exposing Vitamin-D deprived skin with fewer threads pales in comparison to facing severe winter weather with unsuitable summer treads.

Since 2019, mandatory winter tire and chain requirements extend to April 30 on select highways, including mountain passes and rural routes in high snowfall areas.

Which routes, exactly? Well, we’ve got a trio of handy maps for that, one for each region. Here’s the Southern Interior. Collect them all by visiting our Designated Winter Tire & Chain-up Routes webpage. 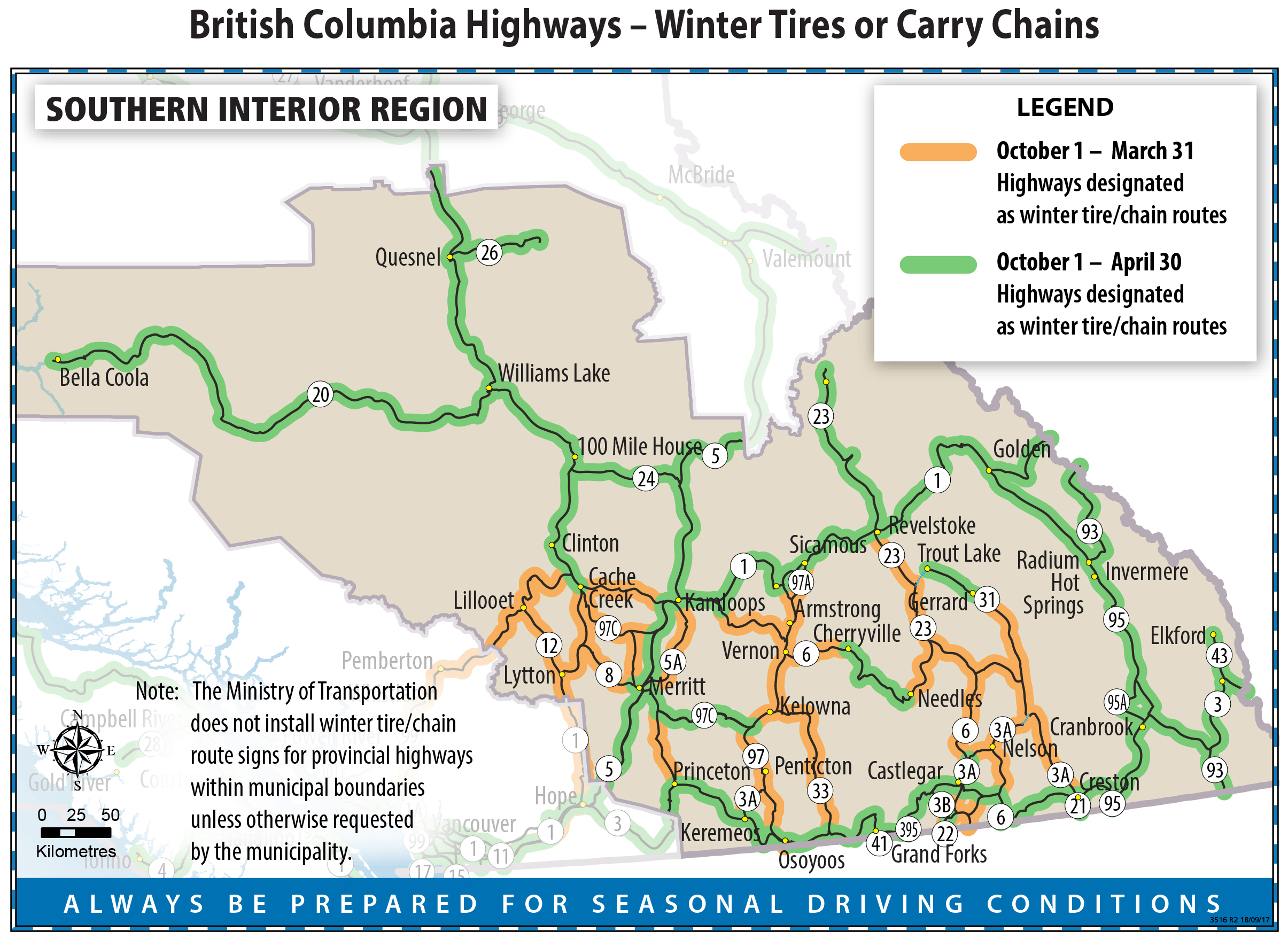 So, the question remains: to swap or not to swap? Tires, that is.

Well, the answer is obvious if you travel any of the highways we ironically marked in green, the colour of new growth springing to life. In this case, green means there’s a chance the white stuff could fall here through April. You’ll notice northern BC and high elevation mountain passes are coloured accordingly.

On the other hand, if you tend to stick to highways marked in orange, there is less of a chance of running into snow after March 31. But anything can happen. These are only guidelines – Old Man Winter doesn’t listen to us. Fortunately, you can check road conditions via the DriveBC website before heading out.

Remember: a legal winter tire is defined as one with at least 3.5mm of tread and either the mountain/snowflake and/or M+S marked on the sidewall. However, it’s important to note the differences between these two tires.

Severe winter tires with the mountain/snowflake emblem maintain good traction in winter conditions because they are composed of a rubber compound that stays soft in cold temperatures. They also have an aggressive tread design for added traction on snow and ice.

Meanwhile, M+S tires may not perform as well as severe winter tires in harsh conditions; however, they have a shape and tread design that gives better traction than summer tires in snow and ice.

Therefore, some people choose to use mountain/snowflake tires in the winter, and M+S tires the rest of the year.

When it comes to commercial vehicle drivers, we know many choose to keep chains onboard year-round. Because, why not? Good idea to be prepared at any time, in any situation.

Now that you’re informed about the extended winter tire and chain regulations, it’s up to you to decide whether it’ll be the right time for shorts, t-shirt, and a tire swap come April. What will it be? Let us know in the comment section.