Every month, from May to October, 160 cyclists are injured in B.C. (This sad statistic is from ICBC).

Whether on fat tires or skinny tires, everyone driving and cycling, needs to share the roads and the responsibility for safety.

Cyclists are entitled to use the majority of provincial roads – from smaller two-lane highways around popular cycling destinations, to remote highways like the Stewart-Cassiar, to high-speed, high-volume routes like the Lougheed Highway (Highway 7). Plenty of people cycle provincial highways to commute to their jobs, whether in Northern B.C. and Vancouver Island, or the Lower Mainland and Southern Interior, and not just during Bike to Work Week. Plus cyclists pedal provincial highways for recreation, fitness, tourism and occasionally, competition.

In some places, the routes may not have shoulders or bike lanes. In others, they do. Wherever cyclists and drivers may be, here are 10 ways to savor the open road, stay aware of all types of travellers and keep safe.

Top Tips for Cyclists on Highways: 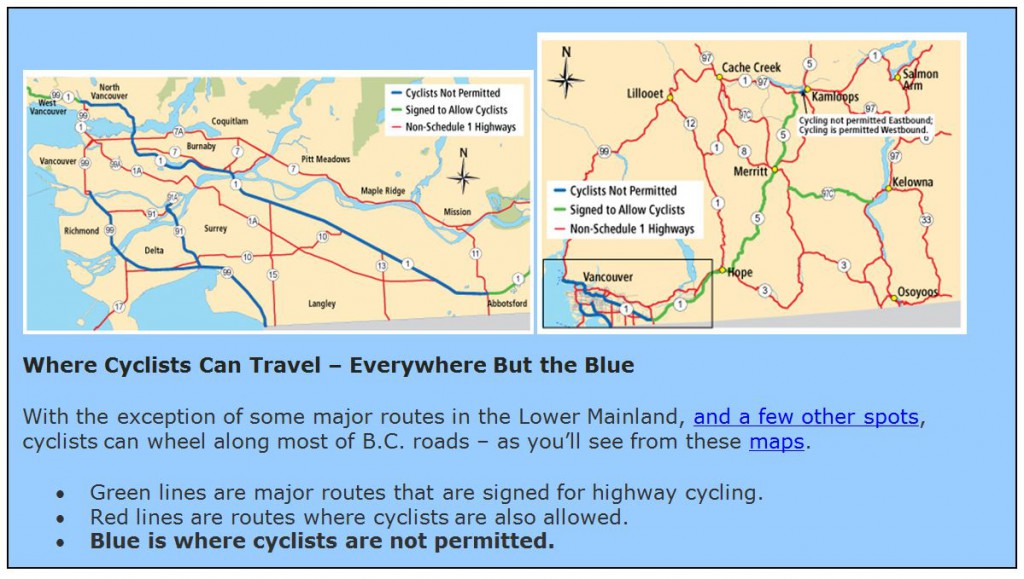 B.C. is a big, beautiful province for driving and cycling. No matter what your tire width, you can enjoy the open road and help keep everyone safe, by watching out for all types of wheeled transportation.

Have you checked out BikeBC, where you’ll find loads of useful information, including how we’re working with communities to enhance cycling infrastructure?