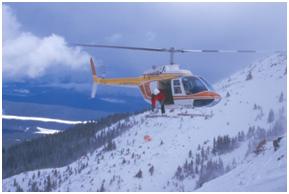 How We Trigger Avalanches to Make Our Roads Safer for Travellers

The snow falls thick and fast, and the mountain slopes become more and more unstable. Is it enough to set off an avalanche? Luckily, if you’re driving the mountain passes in B.C., you don’t 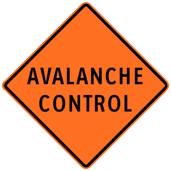 really have to worry about it, because our Avalanche Safety Program folks are on the job 24-hours a day to keep you safe on your travels.

Apart from constantly monitoring the snow conditions, an important part of their routine is actually setting off avalanches. If a slope is unstable and they think an avalanche could impact the road, they’ll close off the affected section of highway, trigger an avalanche, clean up the mess, and to top it all off, they’ll usually have the route open again in just a few hours.

There are a number of techniques our avalanche technicians use to get the snow moving. The most common is using a helicopter to drop explosive charges. The challenge is knowing where and when to apply explosives to the snowpack. This is where our technicians excel, as they are highly successful in getting good results with their control work. That ultimately translates to safe highways with minimal closure times. 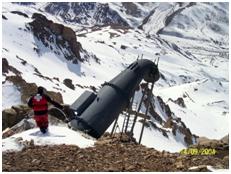 Our crews also use a variety of remote avalanche control devices that can be controlled with a computer from within a vehicle or office. The most common remote device we use is called a Gaz-ex Exploder. It does just what it sounds like it should. It uses gas (a mixture of propane and oxygen) to make explosions that impact the snow surface with the equivalent force of 10-20 kg of TNT (depending on the size of the exploder). 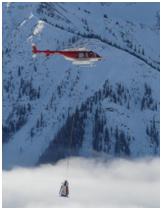 The unit looks like a large pipe coming out of the ground with a hook at the end directed towards the snow surface. As with real-estate, location is everything. Gaz-ex units are actually built directly within the start zone of avalanche paths. That way, they provide the best chance of releasing unstable snow around them when activated.

Another tool we’ve started using lately is called a Daisy Bell, which is kind of like a portable Gazex Exploder. It looks like a large bell suspended from a helicopter, and it can be flown easily wherever it’s needed to trigger a slide. It’s faster and cheaper than dropping charges from a helicopter, and we’ll likely be using them a lot more in the future.

Another remote avalanche control device used in the Provincial Avalanche Program is a device called an Avalanche Guard. It consists of a large metal cabinet attached to the top of a tower. Built to high safety and security standards, each cabinet is loaded with explosives that projected out of a tube into target locations of an avalanche path. 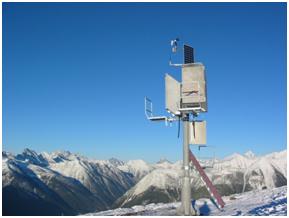 You don’t often equate explosives with safety, but our avalanche technicians do. They get a real charge out of their work and keeping you safe from avalanche hazards.

It’s all part of a day’s work for our highly trained avalanche technician who take great pride in providing the utmost of safety for those who work and travel on our highway network. Besides the enhanced safety these types of avalanche control methods provide, they also serve to reduce the duration of interruptions in the flow of traffic.

If you want to learn more about what we’re doing to keep the travelling public safe from avalanches, check out our other TranBC posts and pictures on our Flickr site.